Most Markets Tumbled Last Week, But US Stocks Surged

Last week’s election of Donald Trump triggered widespread selling in global markets, based on ETF proxies representing the major asset classes. US equities bucked the trend with a strong gain for the five trading days through Oct. 11. Stock markets in developed economies also advanced, albeit with a fractional gain. Otherwise, prices were broadly lower last week.

The US equity market, however, cheered Trump’s election victory. Vanguard Total Stock Market (VTI) surged 4.3%, the highest weekly total return for the ETF in nearly four years. The reasoning, according to the bulls, is that Trump’s plans to promote growth through infrastructure projects and other efforts will boost economic growth.

But some analysts remain skeptical. “I think what we have seen the last few days is simply a technical rally,” says Beat Wittmann, partner and chairman at Porta Advisors via CNBC. “People were either wrongly positioned or not positioned at all and there is always patriotism at work. I want to see who gets nominated to this cabinet and that will largely determine the priorities.”

Meantime, bonds generally took it on the chin last week amid fears that Trump’s policies will raise inflation rates. As a result, US Treasury yields shot higher, taking a toll on fixed income prices around the globe. “Forthcoming policy changes are likely to generate growth cross-currents, but they should reinforce the tilt toward global reflation,” JP Morgan’s chief global economist Bruce Kasman advises in a research note.

Last week’s big loser: bonds in emerging markets. VanEck Vectors JP Morgan Emerging Market Local Currency (EMLC) shed 7.2%. Although the ETF was launched in 2010, analysts point out that last week’s rout for these bonds marks the steepest weekly loss since the 2008 financial crisis. The fear is that Trump’s economic policies will crimp US trade with foreign countries and push interest rates and inflation higher—changes that will hit hard in emerging markets.

But some strategists say that the selling could lead to a buying opportunity. “We could get to the stage where, in one or two weeks time, U.S. Treasury yields stabilize, and if that happens, emerging markets will come back,” Koon Chow, a strategist at Union Bancaire Privee Ubp in London, tells Bloomberg.

Despite the widespread selling, the outsized gain for US stocks buoyed an ETF-based version of the Global Markets Index (GMI.F). This investable, unmanaged benchmark that holds all the major asset classes in market-value weights climbed 0.6% over the five trading days through last Friday. 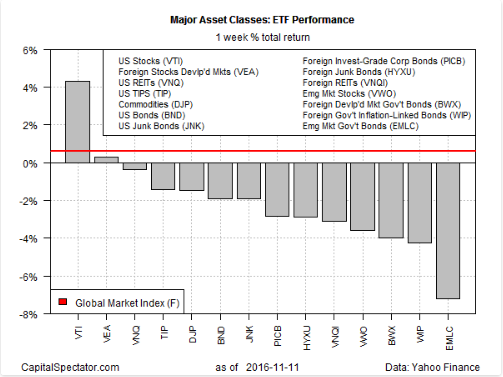 For one-year results, the US equity market is again in the top spot. VTI is ahead by 6.7% for the 12 months through last week’s close. Meanwhile, broadly defined commodities remain in last place among the major asset classes. The iPath Bloomberg Commodity ETN (DJP) has shed 2.4% for the trailing one-year window.

Note that one-year returns across the board are contained within a relatively narrow range in the context of results over the last several years. Although most of the major asset classes are in the black for the past year, the gains are comparatively modest vs. the performances in recent history. 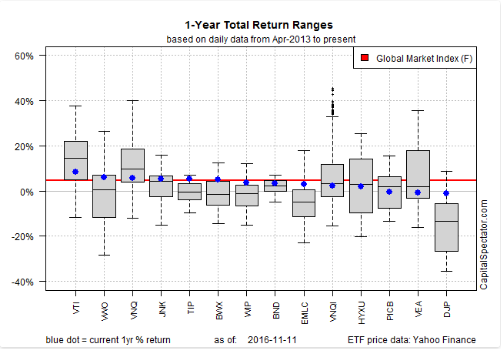