Foreign and US real estate stocks extended March’s rally into the first week of April, generating the top performances among the major asset classes last week, based on a set representative exchange-traded products.

Winners still outnumber losers in the one-year column, but the red-ink brigade’s membership list has expanded to include four slices of the major asset classes as of last week’s close. The biggest decline for the trailing one-year return among the major asset classes: foreign government bonds in the developed markets via SPDR Bloomberg Barclays International Treasury Bond (BWX), which is down 5.1%.

Meanwhile, emerging-market equities continue to hold the top spot for one-year total return as of Apr. 8. Vanguard FTSE Emerging Markets (VWO) is ahead by 23.2% in total-return terms over the past 12 months.

GMI.F’s one-year trend is still solidly positive, although the benchmark’s performance has been slipping lately. The index’s is ahead by 9.8% for the trailing one-year period, or about half the gain that prevailed during the opening weeks of 2017. 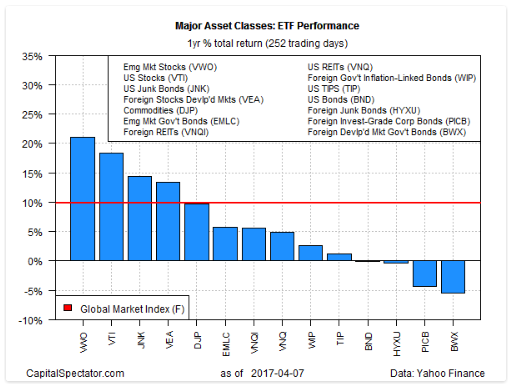