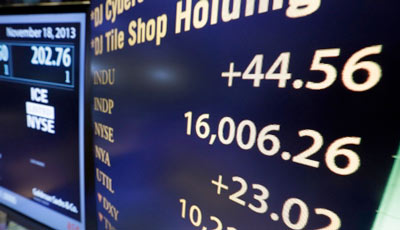 U.S. stocks rose with the dollar as economic data bolstered confidence that the American economy is poised to accelerate. Gold rose and Treasuries erased losses as a slide in the price of crude sparked demand for haven assets..

The S&P 500 Index started the year with its biggest gain in four weeks, while the dollar jumped to the highest level in 14 years as U.S. manufacturing expanded. Oil fell more than $2 a barrel from the highest level in 18 months. European equities entered a bull market as the pace of German inflation doubled last month. Mexico’s peso slid after Ford Motor Co. canceled a $1.6 billion investment in the country. U.S. natural gas futures sank the most in 14 months.

The post-election rallies in riskier assets resumed after a holiday break, as readings on manufacturing in China, inflation in Germany and factory output in the U.S. bolstered optimism that growth is poised to accelerate. Byron Wien, the vice president of multi-asset investing at Blackstone Group LP, predicted the S&P 500 will surge 12 percent this year as economic growth gathers momentum.

The advance that started in Asia and spread to Europe faded somewhat during U.S. hours amid warnings that President-elect Donald Trump’s policies might have unintended consequences for the world’s largest economy. Lawrence Summers cited the possibility of protectionist measures as well as changes to foreign policy among issues that are creating “extraordinary uncertainty.” Analysts at Eurasia Group said Trump policies could contribute to a level of global instability not seen since World War II. Morgan Stanley suggested the best-ever rally for a president elect would end by inauguration day.