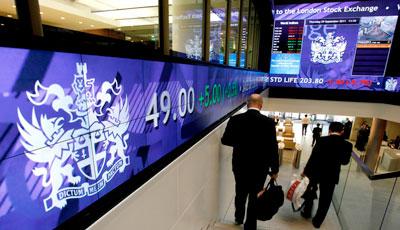 London’s FTSE 100 was catapulted to 7,293.26 points, extending a record-breaking run for the benchmark index that began just ahead of the New Year.

The pound took another pummelling on news that Britain’s trade in goods deficit with the rest of the world worsened in November. Industrial production however rose more by more than market expectations.

“Continued sterling weakness is providing yet more support for equities and we are seeing the FTSE 100 punch fresh record highs and it is now just a whisker away from 7,300 points,” noted ETX Capital analyst Neil Wilson.

“The question now is when this will end — can we call the top of the market?”

The weak pound — which has struck multi-year lows and languished since Britain’s EU exit vote on June 23 — boosts share prices of FTSE-listed multi-nationals as they profit from favourable exchange rates.

London profited from gains to shares of heavyweight miners.

Chinese data “points towards strength in commodity prices, which has been followed up in style, with the likes of copper, gold and iron ore proving enough to drive substantial gains for (mining) names such as Anglo American and Antofagasta”, said Joshua Mahony, analyst at traders IG.

“The incredible bullish sentiment seems to be borne out of a concoction of a weak pound, loose monetary policy, rising commodity prices and expectations of increased US fiscal stimulus,” added Mahony.

China on Tuesday said factory-gate prices surged last month at their fastest pace in more than five years, leading to hopes the country could export much-needed inflation around the world and help kickstart global growth.

The news helped ramp up prices in key commodities such as iron ore, copper and aluminium, which in turn provided support to producers.

Oil prices were only marginally higher after two days of sharp losses, hit by doubts about the effectiveness of OPEC’s planned output cuts.

Investors were meanwhile awaiting Donald Trump’s first press conference since he won the US presidential election, with initial excitement about his plans turning to scepticism about whether he can deliver.

“Markets are on tenterhooks ahead of a 4pm (1600 GMT) Trump press conference, especially after overnight claims about his links to Russia,” noted Accendo Markets analyst Mike van Dulken.

The president-elect faced explosive claims that Russian intelligence gathered compromising information on him. Trump has denounced the report as a “political witch hunt”.