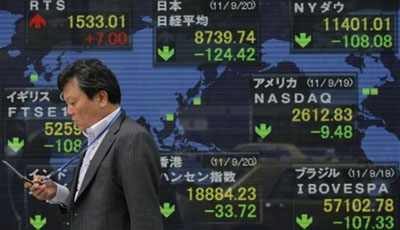 Asian stocks slipped, taking their cue from a weaker U.S. equities session, as a rising yen weighed on shares in Tokyo. The Australian dollar dropped after the nation’s central bank left rates unchanged.

The yen climbed against the dollar for a third day. Tokyo shares were led lower as auto manufacturers reported worse-than-expected U.S. sales for March. China, Hong Kong, Taiwan and India are closed for a holiday. The Aussie fell for a fourth day while government bonds climbed. South Africa’s rand extended declines for a seventh day after the country lost its investment-grade credit rating from S&P Global Ratings for the first time in 17 years.

Investors are taking stock ahead of a key U.S. payrolls report on Friday and minutes from the Federal Reserve’s latest meeting on Wednesday. Institute for Supply Management data showed U.S. factories continued to expand production at a robust pace in March, reaffirming faith in the global economic recovery.

Australia kept interest rates unchanged, remaining in a form of policy paralysis as housing is too hot to allow an easing and the economy too weak to absorb a tightening. India’s central bank also will probably hold rates firm later this week.

What investors will be watching this week: