Taxes on labour income for the average worker across the OECD continued to decrease for the third consecutive year during 2016, dropping to 36% of labour costs, according to a new OECD report.

Taxing Wages 2017 measures the level of personal income tax and social security contributions in each OECD country by calculating the ‘tax wedge’ – the total taxes on labour income paid by employees and employers, minus family benefits received, as a percentage of the labour costs of the employer. The tax wedge is calculated for a range of different family types and at different income levels.

The tax wedge on the income of the average worker decreased slightly, to 36%, in 2016. Last year’s decline follows a multi-year trend, partially reversing tax wedge increases reported in the years immediately following the global economic crisis.

The decrease in the average tax wedge seen since 2013 is partly explained by reforms in some countries to reduce taxes on labour income. For example, in 2016 Belgium and Austria both experienced significant reductions in their tax wedges as a result of labour tax reforms. 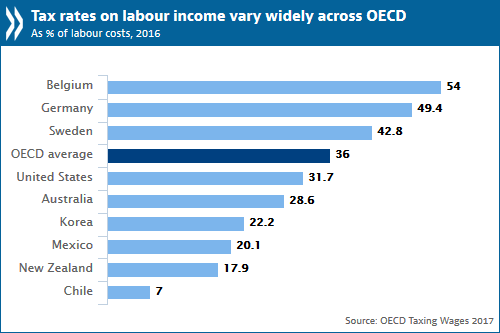 Taxing Wages 2017 also finds that taxes on families with children are lower than taxes on single earners without children in all but two countries (Chile and Mexico), where they are the same.. In 2016, the OECD average tax wedge for one-earner families with children was 26.6%, nearly 10 percentage points lower than the tax wedge on the average single worker. On average across OECD countries the gap between the tax wedges of families and single earners increased slightly between 2015 and 2016.

Taxing Wages provides unique cross-country comparative data on the amounts of personal income taxes, social security contributions, payroll taxes and cash benefits for eight family-types, which differ by income level and household composition. It also presents the resulting average and marginal tax wedge for these family types. Average tax wedges show the part of gross wage earnings or labour costs which are taken in personal income taxes (before and after cash benefits), social security contributions and payroll taxes. Marginal tax wedges show the part of an increase of gross earnings or labour costs that is paid in these levies.

The 2017 edition of Taxing Wages contains a special feature examining the impact of tax on the incentives for workers to invest in their skills. For a typical worker undertaking a short course of training, the combined impact of personal income taxes and employee social security contributions reduces the incentive to invest in skills training, lowering the value of a skills investment by 24.9% on average across the OECD.

“Taxes on labour income for the average worker across the OECD are still falling slightly, although this decline is partly driven by reforms in a handful of countries,” said Pascal Saint-Amans, Director of the OECD’s Centre for Tax Policy and Administration.  “Boosting the work incentives of low and middle income earners by reducing the tax wedge on labour incomes continues to be an important way of encouraging inclusive growth.”

Tax wedges for families with children