Someday, stock, bond and real estate valuations will matter again. And the mechanism by which this return to sanity is achieved will probably be the torrent of money now flowing in from people who, for various reasons, don’t care about (or understand) the prices they’re paying.

Millennials, for instance, seem to have reached the “beginners’ mistakes” phase of their financial lives. They’re major buyers of recreational vehicles – see The Perfect Crash Indicator Is Flashing Red — and are now opening stock brokerage accounts at a startling pace:

Schwab: “New Accounts Are At Levels We Have Not Seen Since The Dot Com Bubble” As Millennials Rush Into Stocks

(Zero Hedge) – In its Q2 earnings results, [stock broker Charles] Schwab reported that after years of avoiding equities, Schwab clients opened the highest number of brokerage accounts in the first half of 2017 since 2000. This is what Schwab said on its Q2 conference call:
New accounts are at levels we have not seen since the Internet boom of the late 1990s, up 34% over the first half of last year. But maybe more important for the long-term growth of the organization is not so much new accounts, but new-to-firm households, and our new-to-firm retail households were up 50% over that same period from 2016.

In total, Schwab clients opened over 350,000 new brokerage accounts during the quarter, with the year-to-date total reaching 719,000, marking the biggest first-half increase in 17 years. Total client assets rose 16% to $3.04 trillion.

Schwab also adds that the net cash level among its clients has only been lower once since the depths of the financial crisis in Q1 2009:

“Now, it’s clear that clients are highly engaged in the markets, we have cash being aggressively invested into the equity market, as the market has climbed. By the end of the second quarter, cash levels for our clients had fallen to about 11.5% of assets overall, now, that’s a level that we’ve only seen one time since the market began its recovery in the spring of 2009.”

But wait, there’s more: throwing in the towel on prudence, according to a quarterly investment survey from E*Trade, nearly a third of millennial investors are planning to move out of cash and into new positions over the coming six months. By comparison, only 19% of Generation X investors (aged 35-54) are planning such a change to their portfolio, while 9% of investors above the age of 55 are planning to buy in.

Furthermore, according to a June survey from Legg Mason, nearly 80% of millennial investors plan to take on more risk this year, with 66% of them expressing an interest in equities. About 45% plan to take on “much more risk” in their portfolios.

In other words, little by little, everyone is going “all in.”

Here’s a related chart showing margin debt – money investors borrow against existing stock portfolios to buy more shares. Not surprisingly given the above, it’s at record levels and rising. 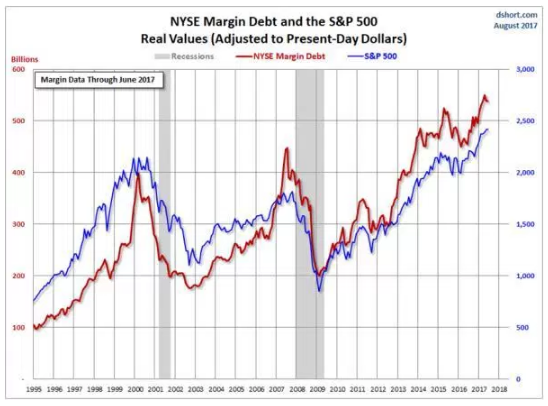 Corporations, meanwhile, continue to hoover up their own shares even as the market averages break records:

Big Pharma Spends on Share Buybacks, but R&D? Not So Much

(New York Times) – Under fire for skyrocketing drug prices, pharmaceutical companies often offer this response: The high costs of their products are justified because the proceeds generate money for crucial research on new cures and treatments.
It’s a compelling argument, but only partly true. As a revealing new academic study shows, big pharmaceutical companies have spent more on share buybacks and dividends in a recent 10-year period than they did on research and development. The working paper, published on Thursday by the Institute for New Economic Thinking, is entitled “U.S. Pharma’s Financialized Business Model.”

The paper’s five authors concluded that from 2006 through 2015, the 18 drug companies in the Standard & Poor’s 500 index spent a combined $516 billion on buybacks and dividends. This exceeded by 11 percent the companies’ research and development spending of $465 billion during these years.

The authors contend that many big pharmaceutical companies are living off patents that are decades-old and have little to show in the way of new blockbuster drugs. But their share buybacks and dividend payments inoculate them against shareholders who might be concerned about lackluster research and development.

While stock buybacks appear to be particularly troublesome among drugmakers, big companies in other industries — in sectors like banking, retail, technology and consumer goods, among others — are also buying back boatloads of their shares. Through May, some $390 billion in buybacks have been announced this year, $13 billion more than at this time in 2016, according to figures compiled by Jeffrey Yale Rubin at Birinyi Associates, a stock market research firm.

June 28 was the biggest single buyback announcement day in history. That was when 26 banks disclosed buybacks worth $92.8 billion, largely a response to having just passed the stress tests administered by the Federal Reserve Board. That figure blew past the previous record of $56.4 billion announced on July 20, 2006.

Note that last sentence: The previous record for corporate share repurchases occurred about a year before stock prices fell off a cliff.

But the dumbest money is not in the private sector. It’s sitting around central bank conference tables making clueless bets on equities with taxpayer (i.e., make-believe) money. The Bank of Japan is leading the way:

(Japan News) – At its Policy Board meeting on July 28-29, 2016, the BOJ decided to increase its purchases of ETFs, which hold stocks and other assets, at an annual pace of ¥6 trillion from ¥3.3 trillion.

Since then, the benchmark 225-issue Nikkei stock average on the Tokyo Stock Exchange has risen some 20 percent.

The BOJ program “has created a sense of security among investors,” Nobuyuki Hirano, chairman of the Japanese Bankers Association (Zenginkyo), and president of Mitsubishi UFJ Financial Group Inc., one of Japan’s three megabank groups, said at a press conference earlier this month.

Last month, BoJ Governor Haruhiko Kuroda told reporters that it is “‘possible in theory’ to reduce the BOJ’s ETF purchases before inflation reaches the target. But it was ‘generally unthinkable’ that the BOJ would remove a part of its easing program, and had no intention of treating ETF purchases differently from the other elements of the program.”

It bears repeating that this is all happening with most major equity indexes at or near record levels – that is, levels that have in the past preceded huge crashes. Which is how these guys came to be known as dumb money.