Most Latin American currencies strengthened on Thursday on expectations that U.S. President Donald Trump will appoint a less hawkish head of the Federal Reserve than expected.

Currencies from Brazil, Chile and Colombia firmed between 0.2 percent and 0.7 percent, supported by the prospect of stronger demand for high-yielding assets.

That perception lost some steam, however, following stronger-than-expected service-sector figures, which boosted the likelihood that the Fed will hike rates in December.

Brazil’s benchmark Bovespa stock index seesawed after jumping the most since August to an all-time high the day before. Still, analysts expect Brazilian stocks to continue rising as Latin America’s largest economy emerges from its deepest recession in a century.

Shares in state-controlled oil company Petróleo Brasileiro SA slipped 1 percent as investors booked profits from the previous day’s rally. The stock rose sharply on Wednesday after a minister said a privatization would be feasible in the long run. 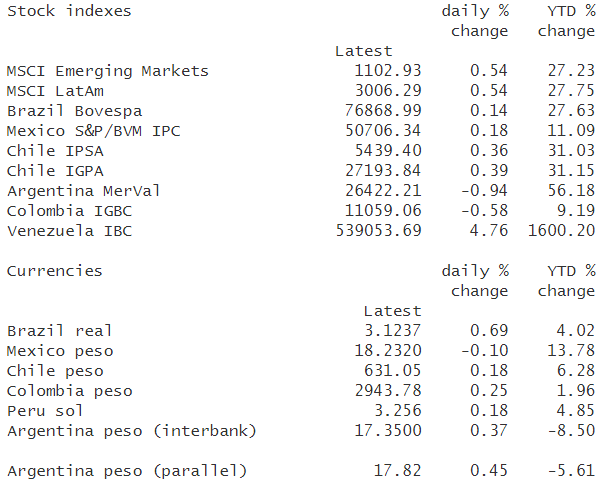