A strong dollar and trade worries did little to dent most Latin American currencies as domestic factors helped them recoup from last session’s heavy losses, with Brazil’s real ending a six-day losing run.

The real firmed 1.7 percent and posted its best day in eight weeks as Brazil’s central bank offered $2 billion in two line auctions, aimed at providing liquidity to the market.

“The central bank’s tendency to conduct line auctions at the end of the year when companies usually remit funds abroad is well-known,” analysts at H Commcor said in a note.

But there was no denying the bank’s move was in response to the currency’s dive on Monday, the note said.

The real slipped nearly 3 percent on Monday as some doubt was cast on smooth passage of President-elect Jair Bolsonaro’s pension reform agenda.

Some traders said strength in the currency also contributed in part to gains on the Bovespa stock index which surged 2.7 percent with most sectors in the black.

Shares of state electricity company Eletrobras rose as a court decision allowed it to proceed with the sale of its distribution companies, putting the company on-track for its planned privatization.

Markets were soothed by comments from the incoming finance minister saying he will push for a larger primary budget surplus next year, seeking to shore up investor confidence after the previous session’s losses.

On Monday, migrant issues at Mexico’s border with the United States piled on to investor concerns already frayed by worries over policies of leftist President-elect Andres Manuel Lopez Obrador’s administration that is set to take office over the weekend.

“Nervousness over the policies of the new administration in Mexico was reduced after the future head of the Ministry of Finance reassured markets,” analysts at Banco BASE said in a note.

The nomination of Esquivel is another factor that has supported the decrease in nervousness since the market considers him as not representing a risk to monetary policy, the Banco BASE note said. The Argentine peso broke a six-session losing streak and climbed 1.3 percent after falling more than 4 percent last session.

The International Monetary Fund said it completed its second review of Argentina, paving way for the country to receive $7.6billion under the $56.3 billion financing deal struck earlier this year to bolster the country’s finances and plug the currency’s free fall. 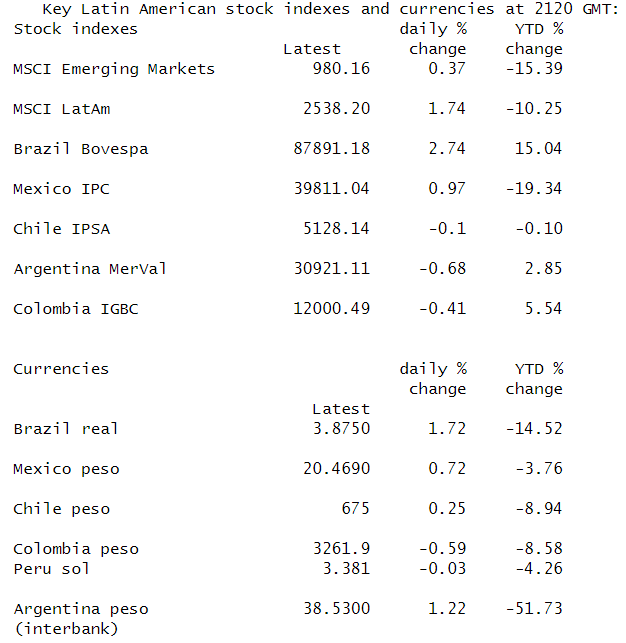