Latin American currencies were mixed against a soft dollar on Monday, while stocks barring Brazil’s Bovespa rose, on a day when global equities were buoyed on optimism over the resumption of U.S.-China trade talks.

The dollar weakened, pressured by expectations the U.S. Federal Reserve will either pause or halt its interest rate hike cycle, propping up developing world currencies.

While currencies such as the Mexican peso and the Argentine peso took some benefit from the greenback’s fall, Brazil’s real suffered heavy losses, declining for the first time in four sessions.

“The moves in currencies today are slightly driven by local factors but there is also some fear from what the Fed will actually do with interest rates in the U.S. as Latam currencies are much more sensitive to them than before,” said Christian Lawrence, Senior Market Strategist, LatAm FX, Rabobank.

The Bovespa index fell, retreating from last week’s record highs as gains in the energy and financial sector were not enough to counter losses in the other sectors.

Eletrobras and Brazil’s biggest airline Gol Linhas Aereas Inteligentes were amongst the biggest decliners on the index.

Preferential shares of Petrobras climbed by 3.24 percent and ordinary by 1.58 percent, after a Brazilian newspaper reported the government will pay $14 billion to the company to settle a dispute about the so-called transfer of rights area off the Brazilian coast.

Brazil’s Economy Ministry has however, denied the report, telling Reuters in a statement that it was only one of several proposals passed to the transition team of President Jair Bolsonaro by his predecessor Michel Temer.

Chile’s peso fell marginally after data showed that the country’s copper exports were down 13.6 percent in December for the world’s largest copper producer because of the volatility in the U.S.-China trade war.

Chile’s benchmark index rose slightly with gains from lithium producers Albemarle and SQM as statistics showed Chile’s exports of lithium exceeded from the previous year in December as demand for the key component in electric vehicle batteries continues to rise.

The Colombian stock markets were shut for a public holiday. 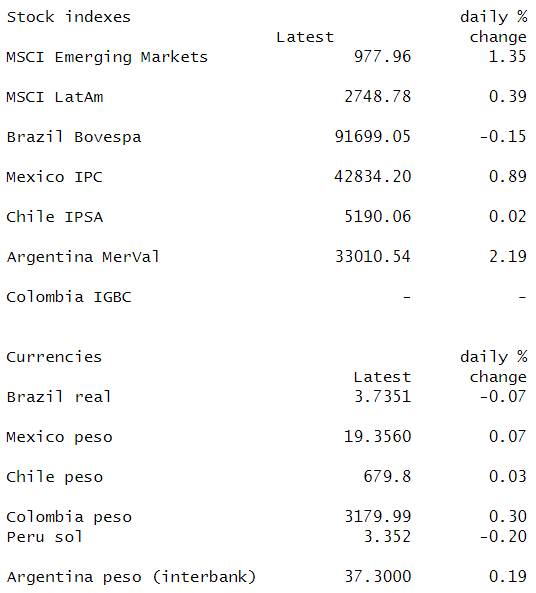