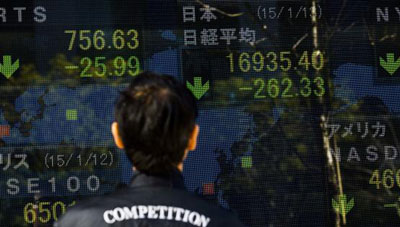 Asian equities kicked off February with a recovery from a three day sell-off, as investors decided the outlook for growth and corporate earnings was strong enough to quell concerns about the recent jump up in bond yields.

The MSCI Asia Pacific rose following a late rally in U.S. equities that saw the S&P 500 Index end January with the best start to a year for the U.S. benchmark since 1997. Japanese equities outperformed while China’s domestic stocks tumbled, heading for the worst week since 2016.

Ten-year Treasury yields remained near the highest since 2014 after Federal Reserve officials set the stage for a March interest-rate increase by adding emphasis to their plan for more hikes. India’s budget is in focus Thursday amid concern the government may deepen the country’s budget deficit, eroding demand for the country’s bonds.

Investors are weighing the path of U.S. monetary policy at a time of synchronized global growth and a strong expansion in corporate profits that’s helped push global equities to record highs this year and sent government bond yields surging. The changes to the Fed statement acknowledged stronger growth and more confidence that inflation will rise to the 2 percent target.

Elsewhere, oil edged higher after recent declines even as production surged above 10 million barrels a day for the first time in four decades. Gold steadied and Bitcoin traded around $10,000.

Here are some important things to watch out for this week: