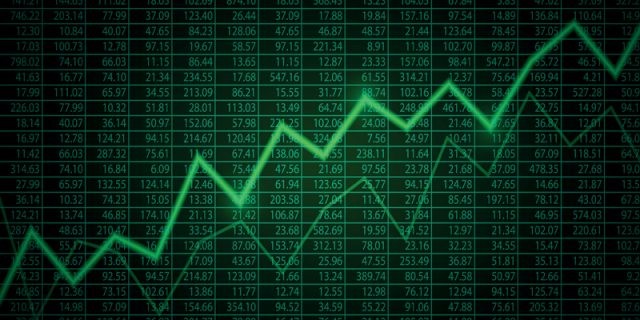 The rally in shares of small-capitalization shares relative to large caps has accelerated in recent weeks. A month ago, the Russell 2000 (a widely followed gauge of small companies) was ahead of its large-cap counterpart (Russell 1000) by roughly three percentage points year to date. The small-cap edge has since widened to nearly five percentage points, as of yesterday’s close (June 13).

Positive momentum has propelled the Russell 2000 to a 9.7% gain so far this year, a solid premium over the Russell 1000’s 4.9%, based on total returns. Although both indexes appear set to extend their rallies, bullish sentiment has been substantially stronger in smaller firms since May. 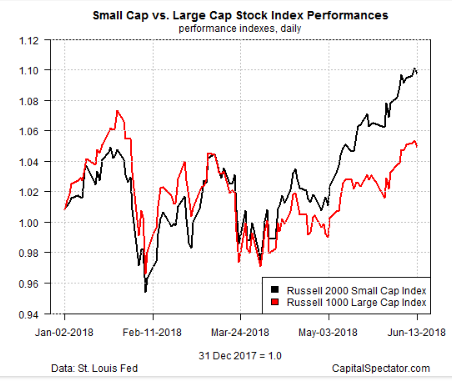 The case for favoring small stocks draws on support in the improving business profile for these companies. As Bloomberg reported this week, the monthly Small Business Optimism Index for May “showed that for the first time the history of the series, which dates back to 1973, more independent business owners are reporting higher quarterly earnings than those reporting a decline.”

Whether you agree with President Donald Trump’s politics or not, it’s hard to say that his efforts to cut back unwieldy rules and regulations while reducing corporate tax rates isn’t benefiting businesses. “For years, owners have continuously signaled that when taxes and regulations ease, earnings and employee compensation increase,” Juanita Duggan, president and chief executive officer of the National Federation of Independent Business, which compiles the report, said in a statement. The results of the poll also showed that positive sales trends are the highest since 1995, while expansion plans and compensation increases are the most robust in the survey’s history.

Nick Kalivas, an analyst at Invesco, a fund manager, last week advised that several factors should keep the small-cap rally bubbling, including a relatively strong tail wind in earnings revisions for these shares. “Earnings estimate revisions have been strongest in the small-cap sector. Forward earnings estimates for the S&P SmallCap 600 Index have risen by more than 28% compared to 18.7% for the S&P 500 Index [a large-cap index] over the past six months.”

The relatively strong US economy is also a plus, according to Zacks, a research shop. “The weak outlook for some of the major economies outside the US has shifted investor attention from foreign markets to the domestic circuit.”

In this respect, the Russell 2000 gained as small-cap stocks have lesser international exposure and are focused domestically. For investors with a high risk appetite and return expectations, funds focused on small-cap growth stocks are the best bets given the current market environment.

Although small-cap momentum is strong at the moment, not everyone’s drinking the Kool Aid. By some accounts, caution is warranted because the rally looks overextended. “We would tend not to chase the small-cap run,” PNC Financial’s Amanda Agati told CNBC last week. “It’s really hard to say ‘back up the truck here, and put new capital to work in small caps.’”

Jason Goepfert, president of Sundial Capital Research, is also cautious on the outlook for small caps. “Overall, it’s a mild warning sign that things have gotten about as good as they can get for the small guys out there,” he wrote in a note to clients this week. “The highest levels of optimism have led to mixed returns.”

Perhaps, but the bearish view for small stocks is still a minority view. A reckoning may be coming — perhaps it’s inevitable. Until this slice of the market stumbles, however, the crowd’s preference for lesser capitalization shares appears set to roll on.