In the third quarter of 2018, hourly labour costs increased by 2.5% and 2.6% respectively. These figures are published by Eurostat, the statistical office of the European Union. 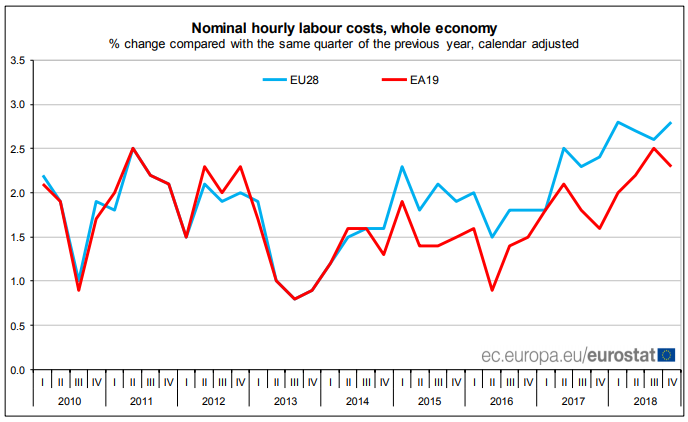 Methods and definitions
The Labour Cost Index is a short-term indicator showing the development of hourly labour costs incurred by employers, in nominal terms, that is without adjusting for price developments. It is calculated dividing the labour cost in national currency by the number of hours worked. Therefore, the development of variables, labour costs and hours worked, affect the evolution of the index (base year = 2012). The quarterly changes in hourly employers’ costs are measured for total labour costs and its main components: wages and salaries; and non-wage costs (labour costs other than wages and salaries). Total labour costs (TOT) cover wage and non-wage costs less subsidies. They do not include vocational training costs or other expenditures such as recruitment costs, spending on working clothes, etc.

Wage and salary costs (WAG) include direct remuneration, bonuses, and allowances paid by an employer in cash or in kind to an employee in return for work done, payments to employees saving schemes, payments for days not worked and remuneration in kind such as food, drink, fuel, company cars, etc.

Labour costs other than wages and salaries (OTH – non-wage costs) include the employers’ social contributions plus employment taxes regarded as labour costs less subsidies intended to refund part or all of the employer’s cost of direct remuneration. Eurostat publishes Labour Cost Index data for NACE Rev. 2 sections B to S. The aggregate is referred to as “Whole economy” for the sake of simplification, even if agriculture, activities of households as employers and activities of extraterritorial organisations are excluded.