Labour costs consist of wages & salaries and non-wage costs (e.g. employers’ social contributions). The share of non-wage costs in total labour costs for the whole economy was 25.1% in the EU and 25.6% in the euro area. It ranged from 5.3% in Lithuania to 32.9% in France.

These estimates are issued by Eurostat, the statistical office of the European Union. Data cover enterprises with 10 or more employees and are based on Labour Cost Survey data for 2016, which are extrapolated through the Labour Cost Index. 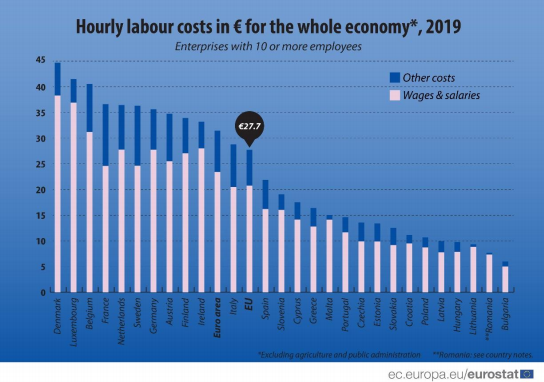 Hourly labour costs increased most in Romania, least in Malta

When comparing labour cost estimates over time, levels expressed in national currency should be used to eliminate the influence of exchange rate movements. For Member States outside the euro area in 2019, the largest increases in hourly labour costs in the whole economy, expressed in national currency, were observed in Romania (+13.1%) and Bulgaria (+11.7%). They increased least in Denmark (+1.9%) and Sweden (+2.2%).

Total Labour Costs refer to the total expenditure borne by employers in order to employ staff. They cover wage and non-wage costs less subsidies. They do include vocational training costs or other expenditures such as recruitment costs, spending on working clothes, etc.