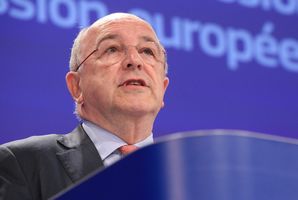 European Union antitrust officials published Tuesday details about a decision to open an in-depth investigation into Apple’s tax deals with Ireland that it alleges fall short of international standards.

“That advantage is obtained every year and on-going, when the annual tax liability is agreed upon by the tax authorities in view of that ruling,” the letter adds.

The letter says that tax rulings granted to Apple, by Ireland, between 1991 and 2007 “do not comply with the arm’s length principle” of the Organization for Economic Cooperation and Development.

The “arm’s length principle” relates to how prices for goods and services are set between unrelated parties.

However, the letter does not constitute evidence that Apple’s tax deals with Ireland violated EU law over state aid for taxation purposes.

Antoine Colombani, European Commission spokesperson for competition, said the investigation was ongoing and that the regulator had no further findings to communicate at this point. Apple could not immediately be reached for comment.

Apple and Irish authorities will receive about a month to respond once the letter — sent to Irish authorities in June — is formally published in the EU’s official journal over the next few weeks, the Commission said.