A Full-Blown Economic Crisis Has Erupted In Russia 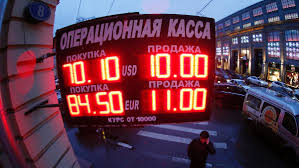 The 8th largest economy on the entire planet is in a state of turmoil right now. The shocking collapse of the price of oil has hit a lot of countries really hard, but very few nations are as dependent on energy production as Russia is. Sales of oil and natural gas account for approximately two-thirds of all Russian exports and approximately 50 percent of all government revenue. So it should be no surprise that the fact that the price of oil has declined by almost 50 percent since June is absolutely catastrophic for the Russian economy. And when you throw in international sanctions, wild money printing by the Central Bank of Russia and unprecedented capital flight, you get the ingredients for an almost perfect storm. But those of us living in the western world should not be too smug about what is happening in Russia, because the nightmare that is unfolding over there is just a preview of the economic chaos that will soon envelop the whole world.

So far this year, the Russian ruble has fallen nearly 50 percent against the U.S. dollar. That is a monumental shift. And as the collapse of the ruble has accelerated in recent days, we are seeing scenes in Russia that are reminiscent of the Weimar Republic. For example, just consider the following excerpt from an article that just appeared in the New York Times…

In a desperate attempt to stop the bleeding, the Central Bank of Russia made an astounding move. Last night it raised its key interest rate from 10.5 percent all the way up to 17 percent.

It was hoped that this desperate move would keep the ruble from plummeting any further.

And it did work for a few minutes, but then the collapse of the ruble resumed. This is how Zero Hedge described the carnage… 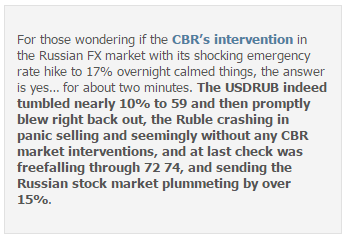 So why is this happening now?

Well, the biggest reason for the freefall of the ruble is the fact that the Central Bank of Russia just printed up about 625 billion rubles and gave it to their friends at Rosneft.

Rosneft is an absolutely massive oil company that is controlled by the Russian government. For months, Rosneft has been asking for a bailout (sound familiar?) to refinance loans that can no longer be rolled over with western banks because of economic sanctions.

And on Friday they got one. 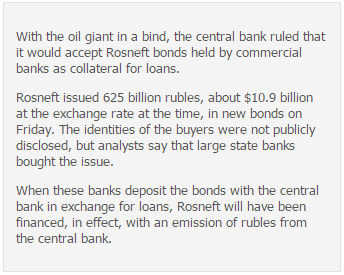 So that is what led to the panic selling that we witnessed on Monday.

Meanwhile, money is being pulled out of Russia at an absolutely staggering pace. As confidence in the ruble and in the Russian financial system disappears, wealthy people are feverishly trying to protect their wealth by moving it somewhere else. The following is an excerpt from an editorial that Mohamed A. El-Erian recently penned for Business Insider… 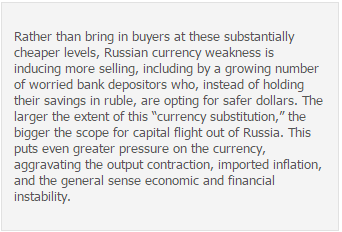 It has been estimated that total capital outflows for 2015 will reach an astounding $128 billion.

And this could just be the beginning of the economic troubles for Russia.

If the price of oil stays this low or goes even lower, the Russian economy will shrink. The only question is how much it will contract…

Sadly, it isn’t just oil producing nations such as Russia that are going to be devastated by the coming crisis.

Eventually, the entire globe is going to feel the pain.

Last week was the worst week for global financial markets in three years, and so many of the exact same patterns that we witnessed just prior to the great financial crisis of 2008 are happening once again. We have been living in a false bubble of relative stability for the past couple of years, but now time is running out. The next great financial crisis is rapidly approaching, and 2015 promises to be the most “interesting” year that we have seen in ages.