Interview with Jens Weidmann: “The risk of exaggerations increases” 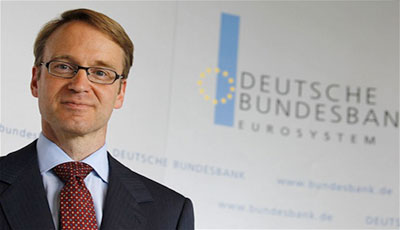 “The risk of exaggerations increases”

Mr Weidmann, the ECB was originally modelled on the Bundesbank. Was this tradition laid to rest on Thursday?

I wouldn’t make this out to be some kind of sea change, but I do regard this decision as quite a serious matter. Sovereign bond purchases are not a conventional monetary policy instrument because they involve particular drawbacks and risks for the euro area. That’s why the conditions for resorting to such purchases need to be strict.

You thought the time hadn’t come for this step?

That’s one of the reasons why I didn’t vote for this move. Of course, inflation rates are very low right now, but that owes a great deal to the decline in oil prices. So there is some evidence that the unusually low rates of inflation are nothing more than a short-lived phenomenon. However, the majority of ECB Governing Council members feared that the general public could become over-accustomed to stagnating prices which, if the worst comes to the worst, might lead to a downward spiral.

Do your colleagues on the Governing Council really believe that deflation is imminent – or is the thinking behind the decisions more akin to a stimulus package?

It’s difficult to separate the two because prices are also more likely to climb if the economy quickens pace. But when oil prices diminish, developments drift apart – prices recede initially but the economy receives a boost. That’s why it would be plausible for a central bank not to respond, provided that second-round effects remain absent. We have a medium-term inflation target, and it’s quite possible for inflation rates to briefly deviate from this target.

Even if you believed there was no need for the programme – will it at least have the desired effect of stimulating the economy and inflation rates?

The impact is difficult to gauge, but it will probably be less pronounced in Europe than in the United States. There are two reasons for this. First, US interest rates started out from a higher level. Second, US firms are more reliant on the capital markets as a source of funding, so securities purchases by the central bank have a much more direct impact than they do in an economy in which banks are the prime source of finance. At the end of the day, Europe’s sluggish growth is down to high debt levels and a lack of competitiveness in individual countries. These are the points which governments need to tackle, and Mario Draghi is among those who have reiterated this message.

Sovereign bond purchases do indeed have side-effects. By rights, many countries should be working to reduce their debt levels, but they now have less of an incentive to do so. If a country is stifled by debt, the central bank might come under pressure to take more and more steps to ease the burden – this pressure will most certainly not let up. After all, a programme like this elevates central banks to governments’ biggest creditors.

You’re talking more about the medium-term dangers. Do you also fear any short-term risks such as bubbles in the real estate or equity markets?

The risk of exaggerations certainly increases, but we currently see no signs in the German real estate market, say, of a bubble emerging. The immediate and fully intended outcome of bond purchases is to push down interest rates. Interest rates on German government bonds with terms of five years or less, for instance, are already in negative figures. This makes investment and consumption more attractive, and increases investors’ propensity to seek out higher yielding and riskier investments.

The programme has long been a highly controversial topic – the critics don’t appear to have made much headway. Even purchases of Cypriot and Greek bonds are possible in principle.

The ECB Governing Council has agreed on a number of constraints to curb balance sheet risks. So there will only be joint liability for a small portion of the programme. This, plus a number of other features, will mitigate at least some of the problems which sovereign bond purchases entail.

Published in Welt am Sonntag