2007 All Over Again? Mega-Merger Edition 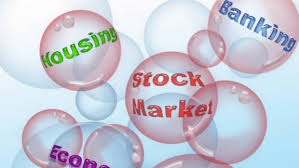 Intel is buying chip maker Altera. Charter is buying Time Warner Cable. All the big drug makers are buying all the mediums-sized ones.

Great news, right? If these huge companies with their top-of-the-line analytical tools and deep insight into their markets think paying way up to build empires is wise, then the stock market, far from being overvalued, must be cheap.

Right. Except that history says the opposite. One of the best signals that a bubble is about to burst is rich people with too much money doing stupid things. And as Mitt Romney likes to say, corporations are people too — which means they’re prone to exactly this kind of herd behavior.

For proof of this you need only recall the last bubble, when household name companies were buying out their peers with abandon (i.e., with hundreds of billions of dollars of other people’s money). Giants like Amro Holding NV, Equity Office Properties, and Alcan Aluminum, among many, many others were all merged into global multinationals at prices that seemed to imply blindingly-bright futures for their industries. (A complete, shockingly-long list of the acquisitions attempted and/or completed in 2007 is available here.)