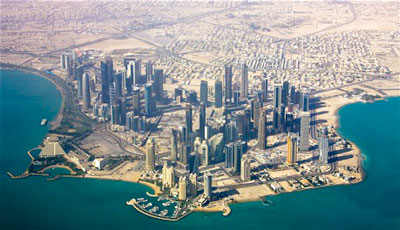 Qatar, Luxembourg and Singapore were ranked the top three in the research published this week which ranked countries by their wealth according to their gross domestic product.

The data provided by the International Monetary Fund and compiled by the Global Finance Magazine, also took into account purchasing power parity, which analyses living costs and inflation rates.

Both the US and Australia made the list’s top ten but Britain was named the 23rd richest country.

Last month, Qatar cut its 2015 economic growth forecast to 7.3 percent from 7.7 percent and now expects its budget to swing to a deficit next year, as opposed to a surplus projected six months ago.

The Ministry of Development Planning and Statistics forecast still implies a pick-up in real gross domestic product growth from 6.1 percent in 2014.

“Real economic growth, despite lower oil prices, is expected to remain strong in 2015 on the back of vigour in the non-hydrocarbon economy that is set to carry through to 2016 and 2017, before it moderates,” it said.

Consumer price inflation is expected to moderate to an average 2.0 percent in 2015, a significant reduction from the previous forecast of 3.5 percent. But that is partly because Qatar has reduced the weighting of housing and utilities in the price index this year.