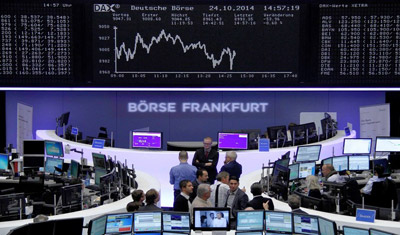 Bayer AG slid 5.7 percent, leading a measure of chemical shares to the biggest loss on the Stoxx Europe 600 Index, after disclosing terms of its offer to acquire Monsanto Co. amid concern that it’s stretching its finances for a deal. Fiat Chrysler Automobiles NVdragged carmakers lower after a report that the German transport authority accused it of manipulating pollution emissions, which it denies. Oil shares lost as crude retreatedfor a fourth day.

The Stoxx 600 dropped 0.4 percent to 336.69 at the close of trading, after earlier gaining as much as 0.4 percent and falling 0.8 percent. Shares climbed the most in a month on Friday as investors shrugged off concerns that a Fed interest rate increase as early as June will derail the U.S. economic recovery. Still, the rate outlook remains in focus and investors will look to data this week and comments today from regional Fed chiefs for St. Louis, San Francisco and Philadelphia for indications on the trajectory of borrowing costs.

“The whole market is in a classic sideways path, trading in a very narrow range,” said Herbert Perus, head of equities at Raiffeisen Capital Management in Vienna. “There is a lot of discussion about interest rates in the U.S. and the data we will see this week is important — maybe then we’ll have a better idea of what’s going on in June, July, or September.”

A European stock rally from a February low has stumbled since reaching a three-month high in April amid concerns about global-growth prospects, mixed earnings reports and the efficacy of central bank policies. Even after last week’s advance, the index is down 4 percent from its recent peak.

Greece’s ASE Index jumped 1.5 percent today, leading gains in the region. The country’s creditors are preparing to disburse 11 billion euros ($12.3 billion) once a review of its bailout plan is successfully completed, according to a European Commission compliance report seen by Bloomberg News.

Among stocks moving on corporate news, Aixtron SE jumped 16 percent after the German supplier of semiconductor equipment said it has agreed to a 670 million-euro ($752 million) takeover bid from a group of Chinese investors.

Apple Inc. suppliers AMS AG and Dialog Semiconductor Plc rose at least 4.5 percent after a report that the iPhone maker has asked suppliers to prepare production for a new version of its smartphones.