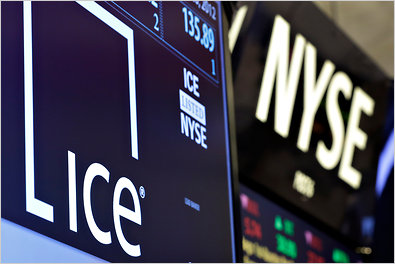 Intercontinental Exchange (NYSE:ICE), a leading operator of global exchanges and clearing houses and provider of data and listings services, today announced that the Bank of England has authorised ICE Clear Europe as a central counterparty (CCP) in accordance with the European Market Infrastructure Regulation (EMIR).

In order to be authorised, ICE Clear Europe has demonstrated that the clearing house’s governance, operations, risk management, treasury and banking infrastructure is EMIR compliant.

“ICE Clear Europe is delighted that our clearing operations have been authorised by the Bank of England in line with the requirements of EMIR and we will continue to work closely with our clearing members and their customers as the European clearing mandates come into force over the coming months,” said Paul Swann, President & Managing Director, ICE Clear Europe.

ICE Clear Europe was established in 2008 as the UK’s first new clearing house in over a century and today it provides clearing for thousands of futures and options products across a wide range of asset classes, as well as Credit Default Swaps (CDS).

The clearing house was launched during the financial crisis, just as the importance of central clearing was becoming even more evident. Despite its short history, ICE Clear Europe has achieved significant milestones, including the increased sophistication of risk management systems, as well as the real-time valuation of portfolios. Shortly after launch, ICE Clear Europe quickly launched a clearing model for European Credit Default Swaps (CDS), which has a separate risk framework, guaranty fund and governance.