Deutsche Bank: 4,000 jobs at risk of being moved out of UK after Brexit 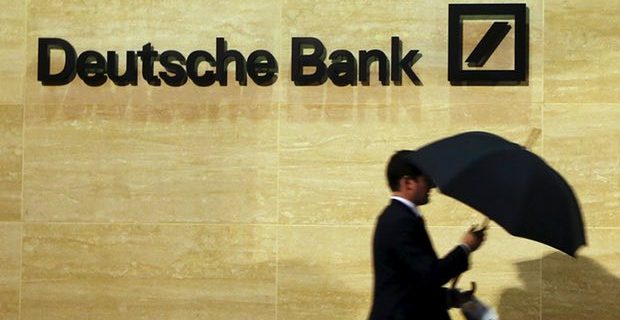 Bank says 2,000 front office people could be moved, with another 2,000 posts to be reviewed depending on new regulations

Bank says 2,000 front office people could be moved, with another 2,000 posts to be reviewed depending on new regulations

Deutsche Bank has warned that up to 4,000 UK jobs could be moved to Frankfurt and other locations in the European Union as a result of Brexit.

Germany’s biggest bank employs 9,000 staff across the UK, including 7,000 in the City, and has called for clarity about how transactions worth billions of euros will be dealt with after the UK leaves the EU.

“For front office people if you want to deal with EU clients you need to be based in the EU, in continental Europe. Does that mean that I have to move all the front office people to Germany or not?” said Sylvie Matherat, Deutsche’s chief regulatory officer.

“We are speaking of 2,000 people – that’s not a small number.” She said another 2,000 jobs were at risk if regulators required banks to move the functions that support client activity – such as risk management.

“Everybody needs clarity – and the sooner the better,” she said. Matherat gave no indication when a decision might be taken.

Her remarks illustrate for the first time the scale of the problem that could be facing Deutsche Bank, which only last month committed to moving to a new London head office in 2023.

The Bank of England has given financial firms a deadline of 14 July to explain how they are planning for the UK’s departure from the EU and warned them to be ready for all possible outcomes, including a hard Brexit. The Bank wrote to hundreds of banks, insurers and other financial firms earlier this month, ordering them to get contingency plans in place.

Financial centres across the EU – such as Frankfurt, Paris and Dublin – have been jostling for the jobs, offices and business that might be forced out of London once the UK leaves the EU. Estimates of how many jobs will be affected by Brexit range from tens of thousands to 232,000 financial services jobs across the UK.

The triggering of article 50 last month – the formal process of leaving the EU – reignited speculation that financial jobs were at risk and was followed by an announcement by the insurance market Lloyd’s of London that it would set up a subsidiary in Brussels, where it it employs about 60 people.

Other City employers are making plans. JP Morgan is considering buying office space in Dublin, and Citigroup has warned it may have to relocate “certain client-facing roles to the EU from the UK”. Goldman Sachs has warned that hundreds of roles could change, while HSBC could switch 1,000 investment banking jobs from London to Paris.

Jes Staley, chief executive of Barclays, told a conference in London that banks could have to start moving jobs within six months, and called for clarity on the status of EU nationals working in the UK. “You will start to see movement in a reasonably short period of time,” he said, according to Reuters.

The scale of the upheaval will depend on whether transactions denominated in euros can continue to take place through clearing houses in London.

Michel Sapin, the French finance minister, told the BBC: “I believe that there is an issue of sovereignty and security of European monetary markets and therefore the majority of the clearing houses cannot remain in London.”