More than 80% of the NUTS 2 regions of the European Union (EU) saw their unemployment rate fall in 2016 compared with 2015, and around 60% recorded a decrease of at least 0.5 percentage points. However, regional unemployment rates continued to vary widely across the EU regions, with the lowest rates recorded in Niederbayern (2.1%) in Germany and Praha (2.2%) in the Czech Republic, followed by the German regions of Oberbayern (2.4%), Mittelfranken and Unterfranken (both 2.5%) and Tübingen (2.6%). At the opposite end of the scale, the highest unemployment rates were registered in Dytiki Makedonia (31.3%) in Greece, Ciudad Autónoma de Melilla (30.8%) in Spain, Dytiki Ellada (29.8%) in Greece, Andalucía (28.9%) and Extremadura (27.5%) in Spain and Mayotte (27.1%), an overseas region of France.

These data on regional unemployment, compiled on the basis of the EU Labour Force Survey, are published by Eurostat, the statistical office of the European Union. A dedicated article is also available on the Eurostat website. 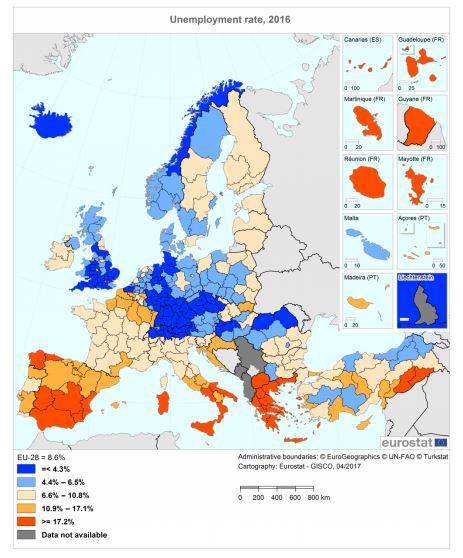 Among the 275 EU regions for which data are available, 60 had an unemployment rate of 4.3% or less in 2016, half the average of the EU (8.6%). They included twenty-four regions in Germany, eighteen in the United Kingdom, six in the Czech Republic, three each in Hungary and Austria, two each in Belgium and Romania and one each in Italy and the Netherlands. In contrast, 32 regions had a rate of at least 17.2%, double that of the EU: twelve out of the thirteen regions in Greece, ten in Spain, and five each in Italy and France (all overseas departments) 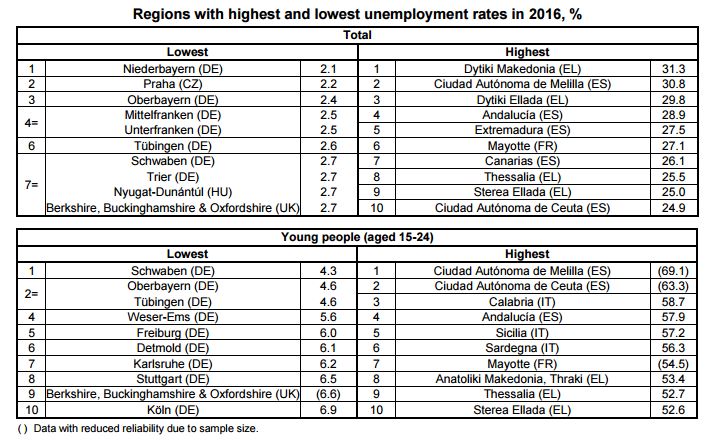 In a quarter of regions, the majority of the unemployed had been out of work for at least a year

The long-term unemployment share, which is defined as the percentage of unemployed persons who have been unemployed for 12 months or more, stood at 46.6% on average in the EU in 2016. In the EU regions, the lowest shares of long-term unemployed were recorded in the Swedish regions of Småland med öarna (14.1%), Mellersta Norrland (14.7%) and Övre Norrland (15.4%). On the other hand, more than three-quarters of the unemployed had been out of work for at least a year in the French overseas region Mayotte (80.9%), in five Greek regions – Sterea Ellada (77.6%), Ipeiros (77.3%), Kentriki Makedonia (75.8%), Dytiki Ellada and Peloponnisos (both 75.5%) – as well as in Severozapaden (76.5%) in Bulgaria.

Geographical information
These data are based on the Nomenclature of Territorial Units for Statistics (NUTS) 2013 as set out in Commission Regulation (EU) No 1319/2013 of 9 December 2013. NUTS 2013 provides a uniform, consistent breakdown of territorial units for the production of regional statistics for the EU.

The statistical regions in the candidate and EFTA countries follow the principles of the NUTS classification; however there is no legal base: Norway (7), Switzerland (7), and Turkey (26), while Iceland and the former Yugoslav Republic of Macedonia are considered as single regions at Level 2.

Methods and definitions
The unemployment rate is defined as the percentage of unemployed persons aged 15-74 in the economically active population. According to the recommendations of the International Labour Organisation, a person is deemed to be unemployed if all three of the following conditions are met:

To read the Full report, visit: Unemployment in the EU regions in 2016