Bitcoin rallied more than 11 percent in just over half a day on Monday, following a dramatic plunge in the cryptocurrency over the weekend.

Bitcoin’s market capitalization, or the total value of all the virtual coins in circulation, rose over $10 billion in the same time period, according to industry website Coinmarketcap.com. 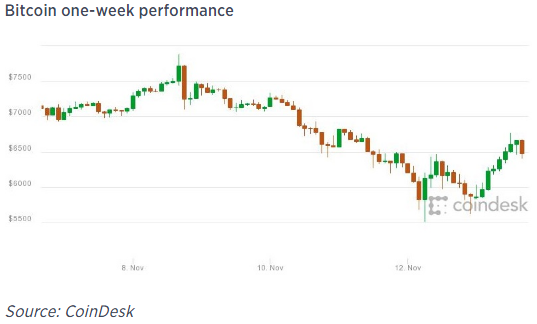 Just last week, bitcoin hit a record high of $7,879.06 that was attributed to factors including CME Group announcing plans to offer bitcoin futures contracts, and some favorable regulation in countries like Japan, which has legalized bitcoin as a method of payment.

The bitcoin network was also due to undergo an upgrade called SegWit2x, which was initially planned for November 16. Its aim was to increase the transactions speed of the bitcoin network. But support for the upgrade has waned causing developers to call off its planned implementation.

Bitcoin cash saw a huge spike as bitcoin sold off with many investors betting that this could be a viable alternative. Bitcoin cash, however, also lost about half its value, plunging from an all-time high of $2,477.65 on Sunday to $1,277.29 on Monday, according to Coinmarketcap.com.