What happens when the pandemic ends? 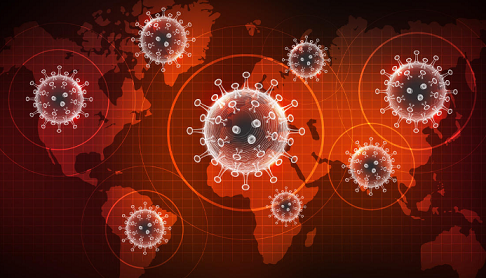 Let’s assume that by the end of this year a combination of social distancing and some new and effective treatments convert covid-19 from existential threat to chronic nuisance and the economy starts to assume an air of normalcy. Which is to say that people go back to traveling and eating out and buying Chinese-made things they don’t need with money they don’t have.

Are we really home free? Or will some other, even bigger black swan come in for a landing?

To put this question into context, it helps to look at how the world got here. In extremely brief form: We engineered a tech stock bubble in the 1990s that burst in 2000, requiring drastically lower interest rates and truly insane speculation in housing to rescue the big banks. When that bubble burst in 2008, interest rates had to fall even further and even more debt – ranging from government to student to subprime auto (and, yes, mortgage) — had to be taken on to save Wall Street. Hence the term “everything bubble.”

Then came the pandemic, which burst the everything bubble and has convinced the world’s governments that truly astounding amounts of new debt are required to bail out all the parts of the private sector that have more-or-less ceased to exist.

Here, for instance, is the Fed’s balance sheet, which is a proxy for the amount of new currency the central bank has created out of thin air and dumped into the economy. The blue line is GDP growth and the red line is Fed currency creation. Note that more and more currency has to be created to maintain the same anemic growth trend:

And here’s the federal government’s debt. Note the same situation as with the Fed: ever-greater borrowing is necessary to maintain a diminishing rate of growth. 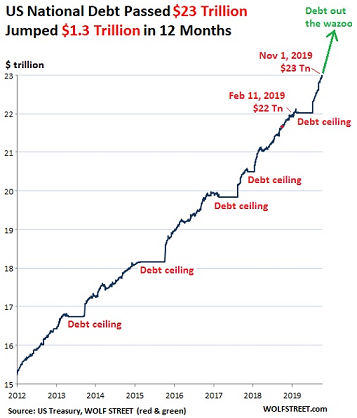 Now back to the original question: What happens when the pandemic is over and we try to resurrect something like normal life? The answer is that we run head-on into the one crisis that was completely foreseeable, which is demographics. Unlike housing busts and pandemics, the number of retirees who will need ever-higher government benefits is right there in pretty much every study of US population trends. The number of people over 65 (and therefore eligible for generous Medicare and Social Security benefits) will surge from about 35 million today to over 80 million by 2050.

The possibility of us ever being able to scale back our borrowing is thus zero.

Looked at this way, the financial side of today’s crisis is actually the new normal. No matter if or when movie theaters, restaurants, and cruise ships fill up again, debt will continue to soar because reining it in is politically impossible.

With the government having lost fiscal tightening as a financial management tool, all the pressure will be shifted to currencies, which historically speaking are a very weak reed. Google “list of hyperinflations” … actually, don’t bother, here’s the list that pops up: 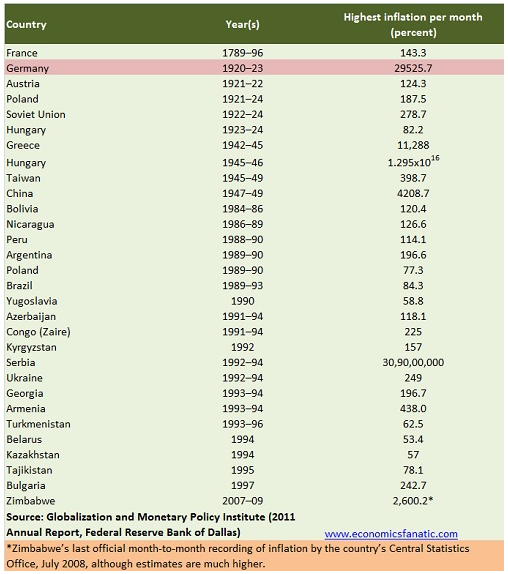 These countries did pretty much what we’re doing, which is to say they responded to crises of one kind or another by running the monetary printing presses. In each case their currencies collapsed due to oversupply and/or loss of faith in government.

The difference between this and those previous hyperinflations is that the latter were isolated crises in a sound-money world. Today everyone is doing it, which means the coming crisis will be global, and therefore just as devastating as any pandemic.