Will a weak dollar bail out emerging markets? Nope

Back in the simpler days of 2019, there was this (now completely forgotten) impending crisis in which emerging market countries’ dollar-denominated debt was going to blow up their – and by extension the rest of the world’s – economies.

The short version of the story is that China, Brazil and some other up-and-comers decided to lower their interest costs by borrowing US dollars at, say, 3%, rather than borrowing in their own bond markets at much higher rates. They’d save money in the short run and profit further in the long run when their economies grew and their currencies rose against the dollar, making it easier to pay off their loans. Based on these rosy assumptions, EM governments and corporations accumulated about $5.5 trillion of dollar-denominated debt.

It didn’t take long for the bet to sour. The dollar rose and emerging market economies slowed, and by last year the debt reckoning seemed close at hand.

Then the pandemic hit and the world forgot about emerging markets.

But their debt didn’t go away, even as their economies shrank under the pressure of lockdowns and lower developed-world consumer spending. And though the dollar has declined against some other currencies – which should in theory help emerging market dollar borrowers – it isn’t falling against a lot of EM currencies, which are declining even faster. 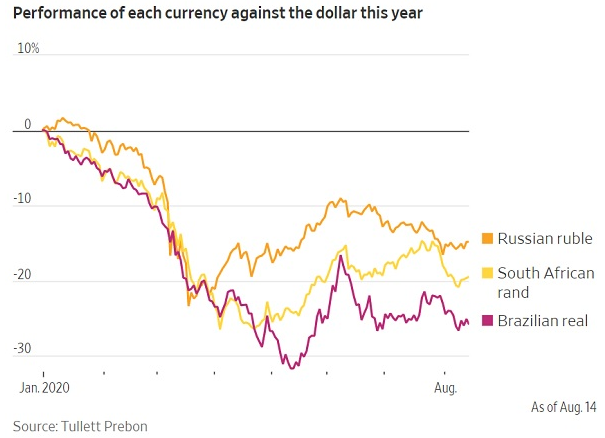 Let’s take Brazil as an example of what this combination of falling income and rising debt looks like:

That compares with a deficit of 29.3 billion reais accumulated in the first half of last year, Treasury said.

Total net revenues in June for the central government, comprising the Treasury, central bank and social security system, were 65.1 billion reais, down 31% in real terms from the same month last year.

The primary deficit accumulated in the 12 months to June was 483.9 billion reais, equivalent to 6.7% of gross domestic product, Treasury said.

The government’s current forecast for this calendar year is a primary deficit of 787.4 billion reais, close to 11.0% of GDP.

The result: Some if not most emerging market countries and their corporations are in a box from which they can’t escape without help from either a rebound in demand for raw materials (their main export) or direct funding from richer countries. And with the US and Europe just a bit preoccupied lately, help isn’t on the horizon.

So – as these things frequently go – the EM external debt problem is being allowed to fester until it can’t be ignored. That is, until the big money center banks realize that they’re on the hook for a lot of this debt and threaten their governments with Armageddon if they aren’t bailed out. At which point the Fed and ECB will create another several trillion dollars and euros and toss it at this latest problem.