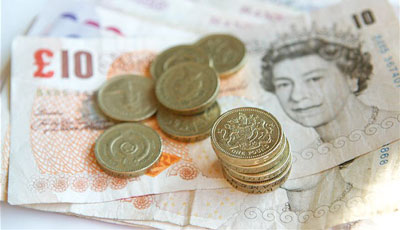 The British Pound went higher on Thursday after the Bank of England opted to keep interest rates and its quantitative easing programme unchanged, a decision that might have surprised some market participants that were looking for more easing to be announced.

That two members dissented confirms that the decision was not a foregone conclusion, and this will explain some of the movements in foreign exchange markets following the decision. Currencies tend to react to surprises and there was a little element of the unexpected in today’s decision to stand pat.

“Two members preferred to increase the target for the stock of asset purchases by an additional £100 billion at this meeting,” said a statement from the Bank. The quantitative easing programme sees the Bank buy government debt and high-grade corporate debt, with the view to guarantee demand and keep the cost of repayments on those bonds as low as possible. The success of the quantitative easing programme will be critical in ensuring the UK financial system continues to operate smoothly and the government can finance its huge costs associated with the coronavirus pandemic.

“While we expect the BoE to announce more asset purchases in the coming months, today was too early for that. As a major part of the stimulus which the BoE has already announced is still in the pipeline, the BoE can afford to wait, especially as key risks remain under control,” says Kallum Pickering, Economist at Berenberg Bank.

Economic forecasts released by the Bank show they expect “a very sharp fall in UK GDP in 2020 H1 and a substantial increase in unemployment in addition to those workers who are furloughed currently. Given the assumed path for the relaxation of social distancing measures, the fall in GDP should be temporary and activity should pick up relatively rapidly.”

“Because a degree of precautionary behaviour by households and businesses is assumed to persist, the economy takes some time to recover towards its previous path. CPI inflation is expected to fall further below the 2% target during the second half of this year, largely reflecting the weakness of demand,” said the Bank.

In line with such expectations, policy makers say they stand ready to act further and introduce more easing measures, if necessary.

The potential for further action at the Bank in the coming months is elevated and we therefore expect markets to keep an eye on what lies ahead, therefore we would not be surprised to see Sterling settle close to where it was prior to the Thursday decision.

Governor Bailey will brief the media on the latest policy decision via the Bank’s website at 10:00 BST.

The Pound appears to be a ‘sell on strength’ candidate in the current environment and we would therefore expect the bounce that we saw following the decision to keep settings unchanged to be faded.

Ahead of the event, foreign exchange strategists at JP Morgan said in a client note they retain a ‘short’ position on Sterling-Dollar, as they still anticipate weakness in the UK currency to play out and result in a move below the 1.22 level.

The Bank of England is now roughly a third of the way through its programme to purchase £200bn worth of government and corporate bonds, while it is also providing liquidity to banks and financial firms that should require it.

In addition, the Bank announced in March it would provide cheap short-term credit to corporates through the Covid Corporate Financing Facility, while the Term Funding Scheme offers cheap liquidity to SMEs.

Despite the existing measures, the Bank said more might be needed: “for all members of this group, the prospective weakness in employment and inflation, and downside risks around aspects of the medium-term outlook, might necessitate further monetary policy action”.

“We expect the BoE to announce another £200bn in asset purchases by the August meeting at the latest. Given the current pace of purchases, and the split vote at the May meeting, we may get at least half of that by the June meeting already,” says Berenberg’s Pickering.