In 2019, 2.3% of employees in the European Union (EU) aged 20-64 had a precarious job, meaning that their work contract did not exceed three months’ duration.

The share of precarious employment, as a percentage of total employment, has remained relatively stable over the past decade, ranging from a low of 2.3% in 2009 to a high of 2.5% during the period 2015-2017. However, this picture may change in the years ahead as the EU economy recovers from the impact of the coronavirus pandemic and the confinement measures introduced by many EU Member States. The pandemic forced many businesses to cut employees’ hours, temporarily cease operations or to close their business permanently.

Employees in the agriculture, forestry and fishing sector had the highest share of precarious work contracts, at 7.5% in 2019. This was followed by the wholesale and retail trade, transport, accommodation and food service activities sector (2.8%) and the and the sector of the other service activities and the activities of households as employers (2.4%).

Between 2014 and 2019, most economic activities displayed seasonal fluctuations, however at different magnitudes. Overall, the third quarter had the highest number of employees with precarious jobs.

Among all economic activities, the wholesale, retail trade, transport, accommodation and food service activities sector represented the sharpest fluctuations in the number of employees who had precarious jobs, with an average increase of 30% from the second to the third quarter. 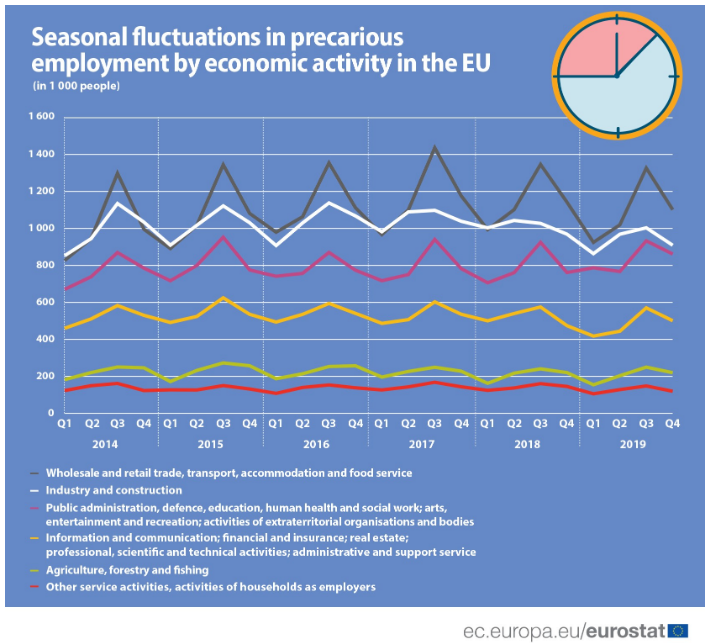 Share of precarious employment highest in Croatia, lowest in Czechia and Romania

Among the EU Member States, Croatia has had one of the highest shares of precarious employment since 2012. However, since its peak in 2016 (8.0%) this share has been gradually decreasing, reaching 5.8% in 2019.

At the other end of the scale, Czechia and Romania recorded the lowest share of precarious employment (both 0.2%).