US and EU expected to announce sanctions against Russia 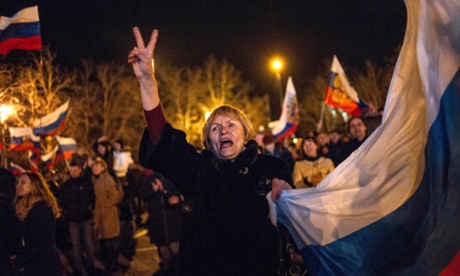 The US and its allies in Europe are expected to announce sanctions against Russia, including visa bans and potential asset freezes, on Monday, one day after Crimea’s vote to secede from Ukraine and join Russia.

President Barack Obama told Russian President Vladimir Putin on Sunday that Crimea’s vote “would never be recognised” by the United States, as he and other US officials warned Moscow against making further military moves toward southern and eastern Ukraine.

The two leaders spoke after residents in Crimea voted overwhelmingly in favour of the split in a referendum that the United States, European Union and others say violates the Ukrainian constitution and international law and took place in the strategic peninsula under duress of Russian military intervention. Putin maintained that the vote was legal and consistent with the right of self-determination, according to the Kremlin.

With three-quarters of Sunday’s ballots counted in Crimea, support for union with Russia was running at 95.7%

“The results of the referendum in Crimea clearly showed that residents of Crimea see their future only as part of Russia,” the deputy speaker of the State Duma, Sergei Neverov, was quoted as saying.

But the White House said Obama reminded Putin that the US and its allies in Europe would impose sanctions against Russia should it annex Crimea.

During the call, which came amid an exchange of decidedly Cold War-style rhetoric between East and West, Obama urged Putin to pursue a diplomatic de-escalation of the crisis, support the Ukraine government’s plans for political reform, return its troops in Crimea to their bases, and halt advances into Ukrainian territory and military build-ups along Ukraine’s borders.

Obama told Putin that “a diplomatic resolution cannot be achieved while Russian military forces continue their incursions into Ukrainian territory and that the large-scale Russian military exercises on Ukraine’s borders only exacerbate the tension,” the White House said in a statement.

Even before official results of the referendum were announced, the White House denounced the vote, saying “no decisions should be made about the future of Ukraine without the Ukrainian government” and noting that Russia had rejected the deployment of international monitors in Crimea to ensure the rights of ethnic Russians there were protected.

“Russia has spurned those calls as well as outreach from the Ukrainian government and instead has escalated its military intervention into Crimea and initiated threatening military exercises on Ukraine’s eastern border,” the White House said, calling those actions “dangerous and destabilising”.

But with no military response envisioned, and with US and EU sanctions apparently foregone conclusions, the Obama administration slightly shifted its focus to keeping Russia from encroachment into Ukraine beyond Crimea, where it has a large naval base.

US officials warned that any Russia moves on east and south Ukraine would be a grave escalation requiring additional responses.

In a call with Russian foreign minister Sergey Lavrov, secretary of state John Kerry expressed “strong concerns” about Russian military activities in the southern Ukrainian region of Kherson, where Russian troops appeared Saturday, and about “continuing provocations” in cities in east Ukraine, the US state department said.

Kerry “made clear that this crisis can only be resolved politically and that as Ukrainians take the necessary political measures going forward, Russia must reciprocate by pulling forces back to base and addressing the tensions and concerns about military engagement,” it said.

He also urged Russia “to support efforts by Ukrainians across the spectrum to address power sharing and decentralisation through a constitutional reform process that is broadly inclusive and protects the rights of minorities,” including ethnic Russians, Russian speakers and others in the former Soviet republic whom Russia says it is concerned about, the department said.

The call was the second between Kerry and Lavrov since they had six hours of unsuccessful face-to-face talks on London on Friday.