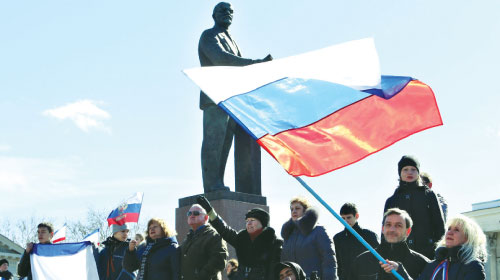 European leaders on Thursday weighed additional sanctions against Russia, a day after Ukrainian troops were forced to abandon their bases in Crimea and prepared to evacuate the peninsula.

German Chancellor Angela Merkel told her parliament that Europe would expand the number of individuals punished with travel bans and asset freezes for their role in the Russian takeover of Crimea. But as European Union leaders prepared to meet in Brussels, there was little sign they would impose the sort of broader financial penalties that many analysts see as necessary to change Russian behavior.

The Obama administration has said it will definitely impose further measures against Russia as well, but has not indicated what they will be or when they will be announced. Administration officials have repeatedly emphasized their close consultation with Europe, and the announcement of initial sanctions early this week was coordinated with the allies.

Speaking from Brussels, interim Ukrainian Prime Minister Arseniy Yatsenyuk said he believed Russia would not stop at Crimea. “It’s crystal clear for us that Russian authorities will try to move further and escalate the situation in southern and eastern Ukraine,” Yatsenyuk told Bloomberg.

The gathering came as the Ukrainian presence in Crimea continued to ebb. Ukrainian banks were closed Thursday, with signs taped to the doors saying they no longer have authority to operate in Crimea because they are on foreign territory. They said they are making arrangements to reopen and depositors will not lose their savings.

Leonid Polyakov, deputy minister of defense, said a plan has been prepared to evacuate military families from Crimea but the troops themselves have not yet been given orders.

Ukraine said on Wednesday it would seek U.N. support in declaring Crimea a demilitarized zone so that its troops could be relocated to Ukraine proper, effectively acknowledging that it had lost the region despite vows it would never cede to Russia.

In the announcement, the secretary of Ukraine’s National Security and Defense Council, Andriy Parubiy, said his country would hold joint military exercises with the United States and Britain. He did not provide details, but a Pentagon spokesman in Washington said the annual multinational exercises were previously planned and will be held in the summer.

Parubiy also said Ukraine would leave the Commonwealth of Independent States, an alliance of 11 nations that were part of the Soviet Union before it broke up
in 1991. It is led by Russia, and Ukraine’s departure echoes steps taken by Georgia after two of its territories broke away in 2008 with the support of Moscow.

Russia’s storming of the military facilities, and the positioning of forces outside another base, was a tense reminder of how unresolved the situation on the ground remains in Crimea even as Russia declares its absorption of the region an established fact. Ukrainian troops largely gave way without resistance Wednesday, though tension may be building as they face an apparent choice of becoming Russian soldiers and sailors, or moving from Crimea and maintaining their allegiance to Kiev.

Russia is also unlikely to agree to the terms of a demilitarized zone, which would require it to withdraw troops from the region while Ukraine pulls its forces out.

Russia moved swiftly to step up its occupation of Crimea, a day after President Vladimir Putin signed a treaty annexing the peninsula. Its most significant action was the takeover of the Ukrainian navy headquarters in Sevastopol, where pro-Russia militias and Russian regular troops stormed the base and checked Ukrainians at the gate as they left toting bags of personal belongings.

The Ukrainian rear admiral in command was taken out of the compound in a car, and Ukrainian officials charged that the Russians had taken him hostage.

Ukrainian military spokesman Vladislav Seleznyov said the commander, Adm. Serhiy Haiduk, and some other officers and staff were hurt during a scuffle at a military meteorological unit near the town of Yevpatoria, but those were the only reported injuries. He would not specify how many military installations in Crimea remain under Ukrainian control.

At the naval headquarters in Sevastopol, about 200 attackers rammed through the gate of the office complex in a truck and raised the tricolor Russian flag. It was difficult to identify the attackers, but they were well organized and carried out the takeover without incident. After it was over, men wearing unmarked uniforms and holding automatic weapons guarded the gate.

Ukrainian President Oleksandr Turchynov gave Crimean authorities three hours to release Haiduk and stop harassing the Ukrainian military. If the admiral is not released, he said in a statement on his Web site, Ukraine will take “appropriate measures.” The deadline passed without apparent action.

In another sign of shifting control, Ukrainian Defense Minister Ihor Tenyukh was refused entry to Crimea when he tried to visit the region Wednesday.

Referring to the reports of attacks on Ukrainian military personnel in Crimea, Vice President Biden warned Wednesday, “As long as Russia continues on this dark path, they will face increasing political and economic isolation.”

Speaking in the Lithuanian capital, Vilnius, Biden said the United States would respond to any Russian aggression against its NATO allies. Standing with the presidents of Lithuania and Latvia, Biden said President Obama plans to seek commitments from allies to ensure that NATO can safeguard its collective security.

Scrambling for a response

For its part, the Ukrainian government in Kiev approved a plan on procedures to evacuate Crimeans who want to move to the mainland.

Ukraine, unwilling to fire shots that would provoke an even greater show of Russian force, has been left scrambling for a response. The Ukrainian military, with about 130,000 troops, few of them considered combat-ready, is far smaller than Russia’s 845,000-member armed forces.

Military analysts say Ukraine has enough tanks to inflict some damage but not to overpower Russia. Last week, Ukrainian officials issued a call for volunteers to join a national guard, an attempt to harness the fighting spirit that emerged among demonstrators in Kiev who forced the ouster of pro-Russian president Viktor Yanukovych last month.

But that national guard force — expected to number about 40,000 eventually — would operate under the Interior Ministry, helping to keep order and protect power plants and other important facilities.

In Kiev on Wednesday, Ukrainians were discussing ways to get more help from Kiev’s friends in the West. There was little bravado about taking on Russia by themselves.

Vasyl Filipchuk, a former Ukrainian diplomat who is now a political analyst, said the United Nations should suspend Russia from membership in the Security Council to demonstrate that the world is serious about punishing it for annexing Crimea.

Neither Europe nor the United States has produced the kind of sanctions that would give Russia serious pause about widening its incursion into Ukraine, he said. The U.S. sanctions, he said, would do little more than keep a few of Putin’s friends from going to Miami Beach.

Ukraine hopes to sign a partnership agreement Friday with the European Union — the very agreement that Yanukovych refused to sign, setting off the protests that eventually toppled him.

Sergei Naryshkin, speaker of the State Duma, the lower house of Russia’s parliament, said in Moscow that legislation ratifying the annexation of Crimea and Sevastopol could be submitted Wednesday and perhaps given a final vote Thursday.

He described the annexation in grand terms, calling it a new stage in world history and making an oblique reference to Russia’s staring down malevolent ­forces unleashed by the West. “This is a turning point in the confrontation between good and evil,” he said.

Griff Witte in London and Karen DeYoung contributed to this report. Lally reported from Kiev.

(By Carol Morello and Kathy Lally)