IMF Head: Cryptocurrency Could Be the Future 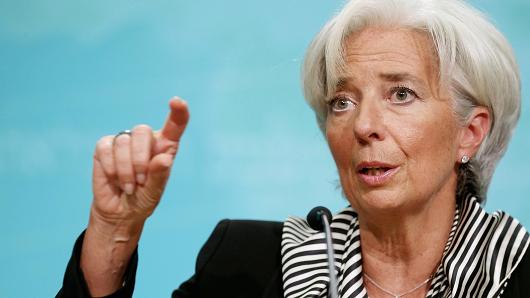 Christine Lagarde sees a path ahead for cryptocurrency.

The managing director of the International Monetary Fund, or IMF, talked up the potential of virtual currencies to supplant traditional monies in coming decades on Friday. Cryptocurrencies, or virtual currencies, are a new class of digital assets powered by blockchains, distributed ledgers that made their name underpinning networks like Bitcoin and Ethereum.

Unlike JPMorgan Chase CEO Jamie Dimon and billionaire hedge fund founder Ray Dalio, who have recently disparaged Bitcoin, the world’s most well known cryptocurrency, Lagarde shared a rosier vision of the general technology’s future with attendees of a Bank of England conference in London. “In many ways, virtual currencies might just give existing currencies and monetary policy a run for their money,” she said.

Lagarde devoted a third of her talk, which envisioned how financial tech may reshape the world by the year 2040, to the subject of cryptocurrency. She noted that digital money could gain popularity as engineers work through technology issues related to processing more payments through blockchain networks in the future.

“Why might citizens hold virtual currencies rather than physical dollars, euros, or sterling? Because it may one day be easier and safer than obtaining paper bills, especially in remote regions,”

Lagarde said. “Virtual currencies could actually become more stable.”
Lagarde couched her predictions with the pretense of sci-fi (“Are you ready to jump on my [hovering drone] pod and explore the future together?” she said), but her forecast matches the view of other big-name optimists, like Fidelity CEO Abigail Johnson. “I’m a believer,” Johnson said at an industry conference earlier this year about digital currencies.

Other topics Lagarde touched on included the possible disruption of the traditional banking business model by fintech upstarts as well as the advent of artificial intelligence.

You can read Lagarde’s prepared remarks in full here

Source: FORTUNE – IMF Head: Cryptocurrency Could Be the Future. Really.