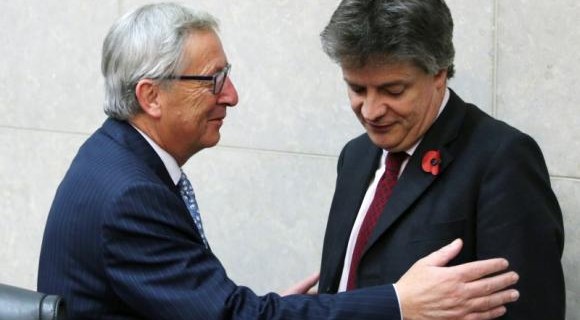 The censure motion in the European Parliament in Strasbourg, France, was resoundingly defeated by 461 votes to 101.

However, the vote was hardly an auspicious start for Juncker, under fire in his first month in office both over his role when Luxembourg leader and over a potential conflict of interest as head of a Commission examining tax avoidance.

The motion said a person who had been responsible for aggressive tax avoidance policies should not head the executive EU Commission, which upholds the laws of the 28-nation bloc.

The Commission is now investigating several tax schemes offered by Luxembourg to global companies to see whether they broke European Union laws on state aid. Ireland and the Netherlands are also under investigation.

Juncker has said Competition Commissioner Margrethe Vestager will conduct the investigation and that he will not discuss the case with her to avoid being seen as trying to influence the outcome, which would harm his authority.

Juncker has billed his new Commission as “Europe’s last chance” to show citizens the EU can act in their interests.

However, a near-record unemployment rate of 11.5 percent and an economy that has barely grown in seven years have left many EU citizens disillusioned, leading to large victories by Eurosceptic parties in May’s European Parliament election.

The enlarged Eurosceptic alliance is now easily able to pass the threshold of 10 percent of the 751-seat chamber to put a motion on the agenda. Thursday’s censure motion would have required two-thirds of votes cast to dismiss the Commission.

It means Juncker’s five-year term could prove a choppy one, punctuated by potentially embarrassing no-confidence motions.

Steven Woolfe, a lawmaker for the anti-EU United Kingdom Independence Party (UKIP) in the European Parliament, said his party would keep up the pressure on Juncker.

“The European Parliament has voted to protect the scandal-soaked Commission president rather than to protect their own people,” he said in a statement. “But the scandal of what Juncker did as the friend of big business will not go away.”

Juncker himself was later quoted by several newspapers as saying he would do the same again in trying to attract international businesses to Luxembourg, whose economy was badly hit by the collapse of steel and other heavy industry.

He did, however, say he would now have changed local laws so that civil servants were not left to agree tax arrangements with companies, unsupervised by the finance ministry.