The Party Is Likely Over for U.S. Treasury Bonds 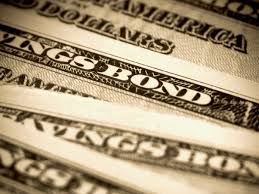 The consensus was that once the Fed began dialing back its massive bond-buying stimulus program last January, bond prices would have to begin plunging. With the stock market so clearly in an ongoing bull market, why would anyone but the Fed buy bonds with their yields at record lows, providing almost no income? The lack of interest in bonds was obvious from their plunge in 2013 even when the Fed was aggressively engaged in its QE bond buying.

The bond rally continued into this year in spite of the on-again, off-again expectations that the Fed will begin raising interest rates this year. (Bond prices move opposite to interest rates). 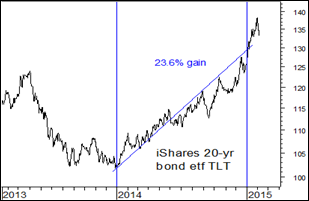 It became clear as last year progressed that global buyers, who were seeking a safe haven from the turmoil in their weakening economies and markets, were more than making up for the Fed dialing back its bond purchases.

However, in the spike-up created by their global popularity, U.S. Treasury bonds have become seriously overbought and overextended above their long-term 200-day moving average. 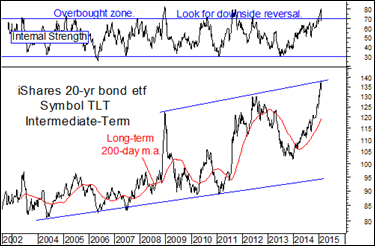 Meanwhile, the same technical indicators that indicated bonds were oversold a year ago and would probably rally in spite of the bearish fundamental forecasts, are now overbought.

In fact, they are overbought to a degree that over the past 12 years resulted every time in bonds declining at least back down to their 200-day m.a., and most often to their long-term trendline support.

On the fundamentals, the Fed is expected to begin raising interest rates, possibly as early as June, which would be a negative for bonds. And global central banks outside of the U.S., particularly in Europe, but also in China and Japan, are cutting interest rates and launching increased QE type buying of their own bonds.

My subscribers and I exited our 20% position in bonds (TLT) in December. So far that has been a mistake as they continued higher in January.

However, that spiked up overbought technical condition, even higher than at the worst of the 2008 meltdown, is looking ominous, while global central bank activities are also threatening to dislodge U.S. treasuries from their favored status throne.

It’s too soon to sell bonds short or take positions in ‘inverse’ bond etf’s like the iShares Short 20-yr bond etf, (TBF), until it is seen how bonds react in the next short-term stock market pullback.

However, it is not a good time to initiate new bond positions, and probably time to at least be prepared for bonds to produce profits from downside positions at some point, probably sooner rather than later.