Potential For Deflation Is Becoming A Big Threat For 2015 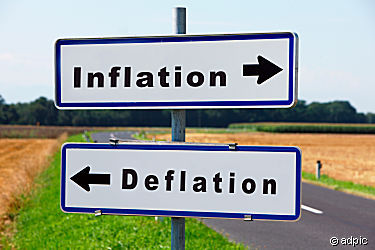 The fears after 2001 were that the Fed’s easy money policies to pull the economy out of the 2001 recession, followed by even more easing, including the near-zero Fed Funds rate instituted after the 2008 financial meltdown, would result in runaway inflation.

Spiraling inflation was so sure to show up that gold, the historical hedge against inflation, surged up in a powerful 10-year bull market, rising from $250 an ounce in 2001 to $1,900 an ounce in 2011.

Gold finally gave up on its expectation for rising inflation in 2011. It has been in a serious 40% bear market decline since.

Not only has inflation not materialized, but fears are now rising of potential deflation, a dangerous period when prices of all assets decline, and the trend feeds on itself for long periods, as businesses and consumers hold off on spending waiting for still lower prices.

Japan’s 20-year deflationary spiral from 1990 and its devastating effect on Japan’s economy and stock market is the most recent example. 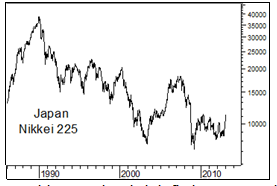 Central banks around the world worry that their inflation rates are heading in that direction, and that they could potentially lose the battle.

That potential is most obvious, and advanced, in the 18-nation euro-zone. Its already low inflation rate fell significantly into deflation over the last two months, and economic growth in the euro-zone is threatening to plunge back into recession.

Central banks, including the U.S. Fed like to see some inflation, especially when economic growth is sluggish. Rising prices help companies show higher sales and profits, encouraging investment. Some wage inflation is also important as it encourages consumers to spend.

Just as importantly, a bit of inflation keeps the economy that much further away from the risk of dropping into deflation, which in some ways is worse than too much inflation.

The Fed’s published hope and target has been to create annual inflation in the range of 2%, even a bit more. It approached that target last summer, but the rate has tumbled so much since that fears of potential negative inflation (deflation) in the U.S. are rising.

The European Central Bank (ECB) has acted. It announced a massive U.S. style QE stimulus program last week, which is to begin in March.

However, the situation puts the U.S. Fed in a bind, in a potential lose-lose scenario.

Unlike the euro-zone, the U.S. economy is not sliding into recession. It has been leading the rest of the world out of the ‘Great Recession’. Its recovery reached the stage last year where it halted its own QE stimulus program, and is hoping to begin the next step in normalizing its monetary policies by beginning to raise interest rates back toward normal this year.

With the strengthening U.S. economy and rising stock market, if it does not begin to raise rates soon, it knows it will risk creating another bubble.

On the other hand, it needs to postpone such action on hopes that continued easy money may still create inflation, or risk the U.S. economy and market also sliding into a deflationary spiral.

Its dilemma was not eased by Friday’s report of U.S. GDP growth slowing to 2.6% in the fourth quarter. Within the report, the Personal Consumption Index (PCE), the Fed’s preferred method of measuring inflation, declined to just a 0.5% annualized rate in the quarter, down from a 1.2% rate in the third quarter. The plunge is oil prices is part of it, and may or may not continue. But the PCE Index excluding the cost of food and energy slowed to a 1.1% pace from 1.4% in the third quarter. Going in the wrong direction even without the oil driver.

My work is calling for 2015 to be a volatile and difficult year for markets. We can look at valuation levels, slowing earnings growth, and so on as potential triggers.

But don’t take your eyes off the inflation/deflation situation. It is likely to be the biggest problem for the Fed in its attempt to keep the game going.