Are Conditions Setting The Market Up For A Summer Washout? 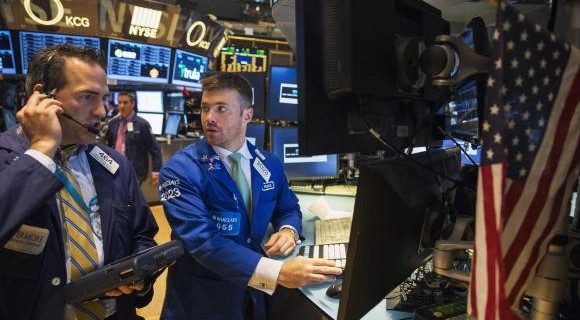 Here is what we can quite confidently depend on.

The stock market makes most of its gains each year in a favorable period of November to May, and if there is a serious correction it usually takes place between May and October.

Even in this unusually long and strong bull market, sustained by Fed stimulus and the so-called Bernanke/Yellen ‘Put’, the market has made most of its gains each year in the ‘favorable period’, while it tended to be flat to lower from May to October. 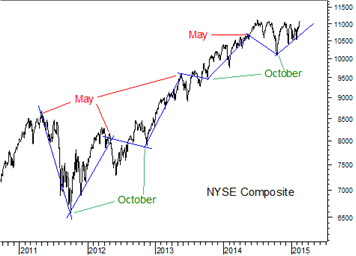 Going back further in history, many academic studies, and actual money-management portfolios, have proven that buying for the favorable period, and then following the Sell in May and Go Away (until Nov. 1) pattern, significantly out-performs the market over the long-term.

For instance, an academic study by Sandro Andrade, Vighi Chaochharia, and Michael Fuerst of the University of Miami, School of Business, covering the period from 1970 to 2012, published by the Social Science Research Network, concluded that, “Surprising to us, the old adage “Sell in May and Go Away” remains good advice. . . . On average, stock returns are about 10 percentage points higher in November to April semesters than in May to October semesters.”

The pattern is working out again this year. After being down 1% from May 1 to its October low last year, the S&P 500 is up 13% since that October low, and breaking out to new highs.

International wealth manager Felix Zulauf does not think so, warning in a Barron’s interview that beginning in the spring he expects 2015 will be “a trader’s dream, but an investor’s hell.”

Among his reasons, “Extreme readings of investor sentiment reflect a lot of complacency, which usually makes a market vulnerable. . . I expect a correction moving into the spring. It could be worldwide, perhaps triggered by earnings disappointments in the U.S.”

However, so far the favorable season continues to work out as it usually does. Its influence endures, under which good news is seen as good news, and bad news is just part of the ‘wall of worry’ a bull market climbs.

Investor sentiment, already at high levels of bullishness and confidence, was made more so by reports on Friday that an agreement was reached in Europe that will extend the debt crisis with Greece for another six months, (into the summer months when it will come up again).

However, in the background, conditions not seen in the last three years are potentially setting the market up for more serious problems in this year’s unfavorable season.

We can begin with the increasing evidence that, in spite of Wall Street’s enthusiasm, the U.S. economy has been slowing since the Fed ended its massive QE stimulus program.

For instance, Durable Goods Orders unexpectedly fell 3.4% in December, widely missing the consensus forecast for a gain of 0.1%. Consumer spending fell 0.3%, its biggest monthly drop since 2009. Factory Orders declined 3.4%, their 5th straight monthly decline. The U.S. trade deficit surged up 17.1% to $46.6 billion in December, a two-month high as exports fell 0.8% and imports rose 2.2%. Construction Spending was up only 0.4% in December, not much more than half the consensus forecast of 0.7%.

The economy slowing does not bode well for corporate earnings. Earnings growth, impressive for a number of years as the economy recovered from the 2008 meltdown, has already slowed significantly, and Wall Street is quickly revising its estimates down for 2015.

Just as worrisome is that while central banks, including the U.S. Fed, have been hoping for rising inflation, instead global deflation threatens. India’s Wholesale Price Index fell to minus 0.4% in January. Inflation in the U.K. fell to 0.3% in December, its lowest level since 1960. This week it was the U.S. Producer Price Index, which came in at -0.8% on a month-to-month basis in January. Even stripping out the costs of food and energy, the core rate came in at -0.3%.

So, this year the economy and markets are probably entering a period with conditions the Fed cannot influence or resolve as easily as it has previous threats; an over-valued stock market, sharply declining corporate earnings, slowing global economies, including that of the U.S., the global glut of oil and plunging oil prices, threatening global deflation, and so on.

An agreement in Europe on the Greek crisis is good news, as is the ‘ceasefire’ between Russia and Ukraine. The potential of the market breaking out of its sideways trading range to the upside is good news – all supporting a continuing favorable season for the market.

However, sneaking out of the bushes into more prominent view are conditions making it important that investors be prepared to take defensive action when this year’s unfavorable season approaches. Another benign unfavorable season is highly unlikely. Failure to prepare is preparing to fail. So said football coach John Wooden, (and Benjamin Franklin).