Why Market’s Seasonality May Be Critical in 2015 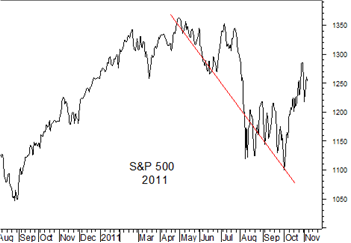 With its FOMC statement, the Fed provided the market with what it wanted to hear.

They removed the ‘patience’ phrase as expected, but replaced it with a similar assurance that there is no set timetable for rate hikes, that it will continue to be in no hurry. “The Committee anticipates that it will be appropriate to raise the target range for the federal funds rate when it has seen further improvement in the labor market and is reasonably confident that inflation will move back to its 2 percent objective over the medium term.”

Well, we know that inflation is moving dramatically in the opposite direction and showing no signs of bottoming, let alone climbing back to 2% anytime soon.

The question now is how long the market’s relief will last before investors realize the Fed’s reluctance to act stems from conditions not normally bullish; a slowing economy, declining earnings, lack of inflation, all while the market is overvalued by traditional measurements.

Perhaps we can get a clue from the market’s history of annual seasonality.

The market has a very long history of making most of its gains in the favorable season between October and May each year, while if there is to be a substantial correction it most often takes place in the unfavorable season of May to October.

The pattern is so consistent that academic studies show that a strategy of investing only for the favorable season and standing aside in cash for the unfavorable season, significantly outperforms the market over the long-term while taking roughly only 50% of market risk.

However, over the long-term it works out quite dramatically, doubling the market’s long-term performance by avoiding serious corrections and most of the down-legs in bear markets.

In addition, when it does not work out for several years, it almost always comes back quite dramatically, making up for its absence. (Otherwise, it would not have its history of so dramatically outperforming the market over the long term).

Since this market has gone for an unusual length of time, since 2011, without even a normal 10% correction, seasonality has lost its importance the last several years, pretty much ridiculed by perhaps short-sighted analysis.

That is understandable, since in each of the last three years, the market has had only minor summer pullbacks and standing aside for them was non-productive. 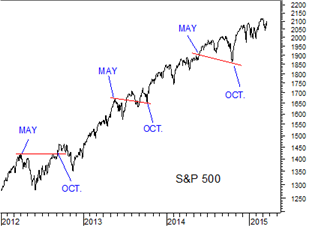 However, can we depend on the unfavorable season in 2015 being as benign?

We are in another situation where the economy is slowing after the Fed allowed a QE stimulus program to expire. The last time that happened was in 2011.

Here is a reminder of what happened in 2011 when the economy was similarly slowing. The S&P 500 plunged 21% from May to October, even though at that time investors were also confident the Fed had its back via the ‘Bernanke Put’, and would not allow the market to decline.

The Fed did allow it to decline, and did not come to the rescue with another round of QE until the S&P 500 was down 21% in October, on the edge of entering a bear market.

It’s interesting that in 2011, like this year, the market was also down in February and to mid-March. That time it recovered to a new high on May 1 before collapsing.

Is that also the best we can hope for this time?

In the interest of full disclosure, my subscribers and I remain bullish, 100% invested in the Dow etf DIA in our Seasonal Timing Strategy, and 90% invested in our non-seasonal Market-Timing Strategy portfolio. However, as I have said in recent columns, bullish – but watchful, still expecting more profits from downside positioning than from the long side later in 2015.