The European households holding the most assets and liabilities

The European households holding the most assets and liabilities

The following data come from a detailed set of non-consolidated annual financial balance sheets for the household sector (including non-profit institutions serving households) released by Eurostat.

Total financial assets of households in the European Union (EU) reached €33 529 billion in 2015. The assets mainly consisted of insurance, pensions and standardised guarantees (39.3% of all households financial assets), currency and deposits (30.3%), equity and investment fund shares (24.2%). 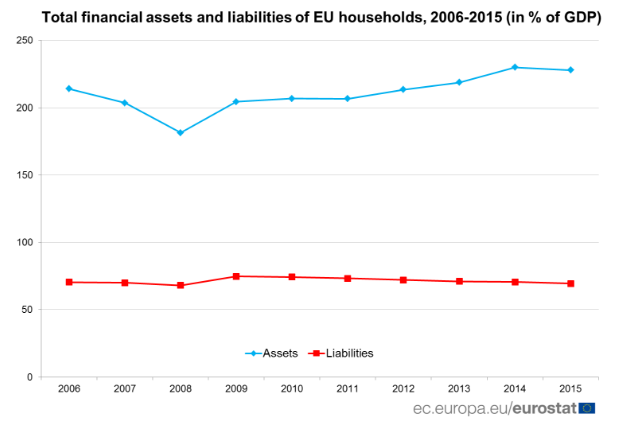 Household financial assets now higher than before the financial crisis

Over the past 10 years, total household financial liabilities have remained relatively stable at around 70% of GDP in the EU. However, the impact of the financial crisis is more evident in total financial assets of the EU households. They decreased from 214% of GDP in 2006 to 181% in 2008, before a recovery to 204% in 2009, and a subsequent steady increase to reach almost 230% of GDP in 2015. In other words, financial assets of households in the EU were slightly higher in GDP terms in 2015 than before the crisis.

The United Kingdom, Germany and France hold the largest financial assets and liabilities

Total financial assets and liabilities of households for EU Member States whose GDP is less than 1% of the EU-28 total were EUR 570.3 and EUR 189.7 billion respectively in 2015.  The highest share of total financial assets is held by households in Hungary (EUR 131.2 billion), Luxembourg (EUR 71.9 billion) and Slovakia (EUR 62 billion), and the lowest by Malta (EUR 23.8 billion) and Estonia (EUR 22.6 billion). The highest share of total financial liabilities is held by households in Luxembourg and Slovakia (EUR 30 billion each), and Hungary (EUR 26.1 billion), the lowest by Latvia (EUR 6.8 billion) and Malta (EUR 6.2 billion). 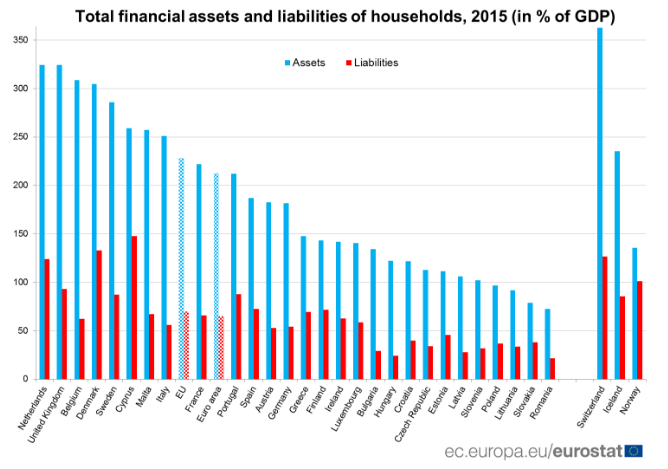